Commander of the Ten Rings Terrorist Group;
Second In Command To Raza
Terrorist

Abu Bakaar is an Afghanistan Terrorist, from the group known as the Ten Rings, that appears in the movie Iron Man.

He is portrayed by actor Sayed Badreya, and was a commander of the terrorist group, only second to their leader Raza. A descendant of great terrorists, he is very brutal, doing as much as killing an innocent father of a boy, just because of embracing his son, from the terrorizing and horrifying situation they were in.

He was very loyal to Raza, and followed any order that was given to him. He was later sabotaged by Iron Man, and was left to be dealt with the same villager that he and his group terrorized. His fate after this is unknown, and he was never seen again in the movie nor in any of the Iron Man film sequels.

Abu Bakaar has a grayish-black hair and beard, and wears a light brown coat to protect himself from the heat.

In an attempt to persuade Stark to build weapons for his group, Bakaar promises Stark his freedom in exchange for his work. However, Yinsen and Stark seem to both believe that Bakaar is lying and will either keep Stark captive indefinitely or kill him even after completion of his goal.

During Iron Man's curbstomp of the Ten Rings in Gulmira, Baakar hides away from Iron Man's assault and attempts to make a phone call, possibly attempting to either secure an escape for himself or calling reinforcements. This possibly suggests cowardice (if attempting to flee and save his own skin).

He is a member of the Ten Rings, and serves under their leader named Raza. He is also the second-in-command to him. He offers Tony Stark freedom in exchange for building the Jericho missile for his group, which both Stark and Yinsen recognize as a false promise.

Later, Bakaar is seen leading a raid on the village of Gulmira. Stark, as Iron Man, defeats the terrorists in a decidedly one-sided battle, and Baakar attempts to hide and make a phone call (possibly to Raza). However, Stark subdues him and leaves his fate to the hands of the villagers who he had just moments before had been brutalizing. His fate is unknown. 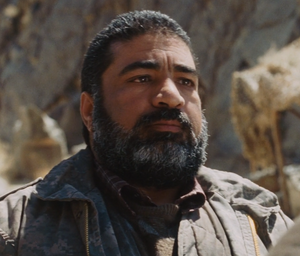 Retrieved from "https://ironman.fandom.com/wiki/Abu_Bakaar?oldid=88318"
Community content is available under CC-BY-SA unless otherwise noted.