The Acura NSX is a famous car model made by car manufacturer Acura. The one owned by Tony Stark is a completely unique 2012 concept car (the second-generation NSX didn't go into production until 2015, and it looked rather different). It was seen being used by him when he drives it along with Bruce Banner near the end of The Avengers film.

After the battle of New York, The Avengers meet once again in the city to bid Thor farewell as he teleports to Asgard with the captured Loki, using the Tesseract's power.

After Thor leaves with Loki, the Avengers disband, with Tony leaving together with Bruce Banner and riding in Tony's Acura NSX. Tony drives the Acura NSX, with Bruce sitting in the other front seat. They both drove off to the unknown, just as the other Avengers had as well. 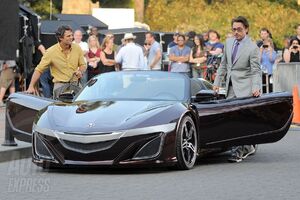 Retrieved from "https://ironman.fandom.com/wiki/Acura_NSX?oldid=89846"
Community content is available under CC-BY-SA unless otherwise noted.