"No more false faces... You said you wanted the Mandarin? You're looking right at him! It was always me, Tony, right from the start. I AM THE MANDARIN!!"
―(Iron Man 3) Killian, revealing his true identity to Tony Stark.

Aldrich Killian is a scientist, an enemy of the Iron Man, and is a well known character that appears in Iron Man 3 He is portrayed by actor Guy Pearce and is based off of the comic-book character by the same name. He is the founder of the project Advanced Idea Mechanics (A.I.M.).

He was featured as the main antagonist in the movie Iron Man 3. Sometime after the December 1999 events Aldrich met Dr. Maya Hansen, creator of the Extremis Virus, and together they worked on improving the virus and fixing it's flaws.

Sometime after that, when the virus was technically ready to be used, he immediately subjected it to himself, curing his crippled disabilities and quickly giving him enhanced abilities.

Aldrich is a tall American, with fair skin. He has golden brown hair, and has tattoo's resembling that of Fin Fang Foom, which is a reference to the character in the comics.

Aldrich was a kind-hearted person before he was humiliated by Tony during the New Years Eve of the year 1999. After his humiliation on the roof, Aldrich had a change of heart. Looking out on the roof, nobody saw him, and nobody was thinking about him, he had a thought that guided him for years to come. That thought was desperation.

Years after the 1999 event, Aldrich changes entirely. With goals to improved Extremis and use it to take over the world, as well as have his revenge towards Tony.

Extremis grants Killian several powers including superhuman strength, regeneration, exothermic based abilities, and the ability to survive severe injuries including being in an exploding Iron Man suit.

As part of his Extremis powers, Killian displayed the power to breath fire which he did to take down James Rhodes when he breaks free of his Iron Patriot suit to try to take him and Eric Savin down.

In 1999, Aldrich had long hair, glasses and was thinner in appearance. He was also a geek.

In Bern, Switzerland, he is at a New Years party, and sees Tony Stark, with his ex-girlfriend Maya Hansen going into an elevator. He then slips in, and tells them about his think tank, Advanced Idea Mechanics, AIM, and gives them his card. They reach their floor, and everyone gets out. Tony tells Aldrich he'd love to work with him, and to meet him on the roof in five minutes. Aldrich goes to the roof, waiting 1 hour and 20 minutes for someone who would never come.

By injecting the Extremis Virus into himself not only does he have healing abilities which gives him speed and strength but also the ability to breath fire from his mouth like a dragon.

He attempts to kill the President to put the Vice President, who works for him, in charge, but is stopped by Tony Stark, his army of Iron Man suits and James Rhodes who rescues the President. Tony apparently kills Killian by putting the Mark 42 on him and then causing it to self-destruct, but he survives due to his Extremis powers.

However, Pepper Potts, who was injected with Extremis to force Tony to help him with it, appears and kills Killian by creating a massive explosion in front of him with a missile from one of the repulsors of the Mark IX suit.

"Ever since that big dude with the hammer fell out of the sky, subtetly has kinda had its day."
―{Iron Man 3) Aldrich Killian to Tony Stark.

"Because when you start to give evil a face. Bin Laden, Gaddafi, The Mandarin? You hand the people a target."
―(Iron Man 3) Aldrich to Tony Stark.

"We haven't even talked salary yet. What kind of park package are you thinking of? Huh?"
―(Iron Man 3) Aldrich to Tony regarding their deal with each other.

"Is this guy bothering you?"
―(Iron Man 3) Aldrich said to Pepper, mocking Tony's attempt to try and save her.

"Too bad, Tony she could have been perfect."
―(Iron Man 3) Aldrich to Tony not being able to save Pepper.

Aldrich is referenced once in the game, during the initial story, when Tony questions how A.I.M. was able to survive even after his defeat. In the end, they made him the M.O.D.O.K. 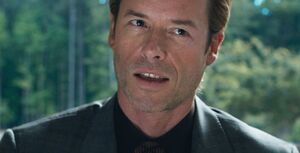 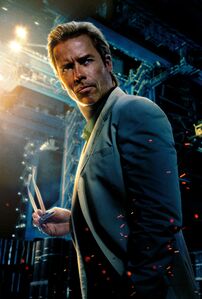 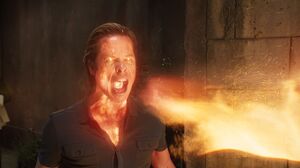 Retrieved from "https://ironman.fandom.com/wiki/Aldrich_Killian_(Earth-199999)?oldid=88320"
Community content is available under CC-BY-SA unless otherwise noted.