All-New Iron Manual was a 2008 one-shot comic from Marvel Comics. The comic contains extensive character biographies for many of the characters in the Iron Man comics, and a list of Iron Man's armors, among other information. 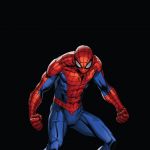