The Arctic Armor was a special variant of the Iron Man armor that was created by Tony Stark in the Iron Man: Armored Adventures TV series. The armor is used for travel at low temperatures.

The Arctic Armor was created by Tony Stark sometime after his encounter with Blizzard, to be able to counter the former if they crossed paths once more.

The armor was activated and used by Tony for a mission to retrieve a raw ore in an abandoned Arctic Facility to be able to save Whitney Stane. 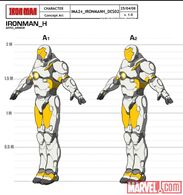 Retrieved from "https://ironman.fandom.com/wiki/Arctic_Armor_(IMAA)?oldid=80749"
Community content is available under CC-BY-SA unless otherwise noted.