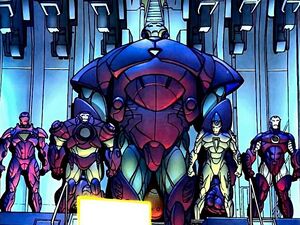 The Argonauts are a group of Armors that were created by Tony Stark, to help him in his work. They are drones, and can be controlled by Stark.

The Argonauts were created by Tony Stark to better utilize his Extremis-based control powers. He had discovered that he was able to control many armors at once, and had become negatively affected emotionally by the Extremis alterations as well. He decided to create a 'shock and awe'-type team of drones which he could control as easily as he controlled his limbs, with a broad array of abilities to deal with any conceivable situation.

Unfortunately they were never deployed properly, instead getting co-opted when Tony Stark became mind-controlled by Ho Yinsen's son, who sought revenge on all the people who were responsible for his father's death. The Argonaut drones, now controlled by Iron Man's subconscious, which had been charged with creating as much havoc as possible, pursued various goals of destruction, and were ultimately all destroyed by Tony Stark himself.

Retrieved from "https://ironman.fandom.com/wiki/Argonauts?oldid=70983"
Community content is available under CC-BY-SA unless otherwise noted.