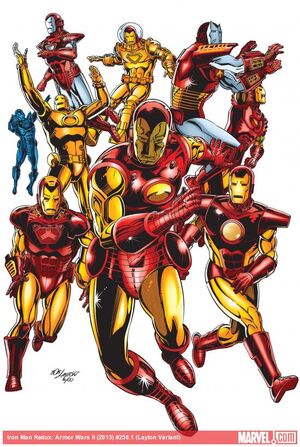 Iron Man (after helping the repentant super-villain mercenary Force fake his death so that he could retire to a normal, law abiding life) makes a shocking discovery upon examining the former villain's armor: it used Stark's very own armor designs. In an attempt to stop other people from misusing his designs, Stark plans to go about disabling other armored heroes and villains who are using suits based on the Iron Man technology (the designs of which were stolen by his enemy Spymaster, who had gone on to sell them to Justin Hammer, days before his death). With the aid of former employee Scott Lang, who infiltrates a front company of Hammer, he discovers the identities of all those using his designs, although one escapes discovery due to security stopping the download. Tony then sets out on his quest to eliminate the technology using negator packs on their armors to destroy the circuitry.

The "Armor Wars" have several other tragic consequences for Iron Man. The West Coast Avengers, of which Tony was a member, ask Tony to explain himself, which he does, and to cease attacking armored opponents, which he refuses to do. Tony subsequently violates international airspace (Soviet Union at the time) and attacks both the Crimson Dynamo and Titanium Man. After negating the Dynamo, Tony sets his sights on the Titanium Man but is outclassed due to Tony using his Stealth Armor, thus lacking the power to oppose the Titanium Man in prolonged combat, and because his only remaining negator pack has been destroyed. Having exhausted his weapons, Tony tries to run, only for the Titanium Man to catch him; his attempt to escape cause the death of Gremlin (the pilot of the Titanium Man armor) when his bootjets overheat and finally combust the Gremlin's titanium armor plating.

Retrieved from "https://ironman.fandom.com/wiki/Armor_Wars?oldid=84251"
Community content is available under CC-BY-SA unless otherwise noted.