The many Armors of Iron Man have been scattered around the decades of "Iron Man". They usually have similar designs and colorings, but they have varied over the years, from color, to size, to the entire outline. The full list follows.

Special Features: An accessory belt that contains many ingenious devices such as Gauntlet Suction Cups in the palms and a Miniature Buzz Saw that can outperform anything a dozen times its size (mounted in the index finger).

Special Features: Roller wheels emerge from the boot housing at the press of a button. Utilizing these skates, Shellhead can travel over short distances quickly, while saving transistor power because--unlike previous skates--these rollers have their own jet motors. Using the skates allows the suit to recharge. The skates are capable of going in reverse. 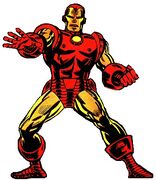 Special Features: A built-in radar-detector, a Proximity Alarm that gives Iron Man a kind of "spider sense." A sensitized alarm sets the armor tingling steadily whenever someone sneaks up on Shellhead.

Special Features: By turning his earpieces, Stark activated jet skates.These jet wheels took less energy than flying, but they also came in handy for quick, dizzying maneuvers on the ground.

Armaments: Repulsors (could be adjusted to deliver an ultra-frequency dose capable of knocking a person unconscious or concentrated into a thin, high-pressure, laser-like beam); Chest beam (capable of beaming light or energy weapons); Electro-Stun Ray (fired from chest beam; manually switched on by turning the rim of the beam; can electrify foes’ weapons); tiny Explosive Pellet (stored in right shoulder epaulet; delivers huge explosion); battery-operated Image Reproducer with Sound Duplicator (could make up to five duplicates appear to confuse opponents). As with all technological wonders, the Flex-Armor eventually became obsolete. Technology always moves forward and soon the once the miracle transistors Tony depended on became outmoded as a source for powering his armor. The future was in integrated circuits. And that’s just where Tony went.

Special Features: Along with the Classic Armor, Tony Stark upgraded his trusty attaché case. Specially constructed so that “no explosion could destroy it,” the new case was as invincible as the armor it held. It not only protected the armor, but it kept it “performance ready” with an internal power charger. The depolarized armor folded nicely for storage into individualized areas, while the mask was stored in a secret slot on the outside of the case—ejected by compressed air at the touch of a button. (Since at this time Stark had to wear his chest plate constantly, his shirts and suits had special padding to conceal the chest beam.)

Armaments: Repulsor rays (integrated circuit design increased the power channeled into them; repulsors fired via a design whereby the weapon discharged when wrist was flexed into the correct position); Vario-Chestbeam (capable of shooting an infrared ray, a black light beam, and mighty doses of UV light, in addition to the high intensity spotlight); palm-based Tractor-Pressor Beams; Power jets with offensive capability; Cryogen Bomb Pellet (stored in right shoulder; freezes the very air, encasing the target in a sheath of pure, cold ice); Magnetized Bombs (small, but powerful); could also shoot high-frequency beams from palms. It should be noted that Tony built another suit, Model V, Mark I-B, for Carl Walker’s use. Walker’s suit had a specifically configured two-way transmitter for direct communication between Stark and his Iron Man, other than that, the suit was identical. Stark kept his I-A suit and returned to using it when he resumed being Iron Man. One last thing of note: Around this time Stark began to expand on his habit of storing his armors all over. Besides a storage space behind a secret wall panel in his office and another emergency suit in a hidden sub-basement in his lab (an early Armory), Tony kept a suit along with spare parts at the Avengers Mansion. He also kept suits in his many cars, most notably his specially equipped Montague. To avoid being seen coming and going as Iron Man, he had a secret airshaft and several hidden passages in and out of his private quarters at the SI plant. 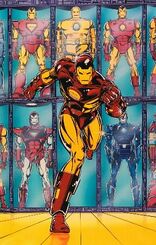 Special Features: Armor had an attache case that "no explosion could destroy". The armor was depolarized so that it could easily fold into the attache case (Since Stark had to wear his chest plate constantly he wore shirts with special padding to conceal it. 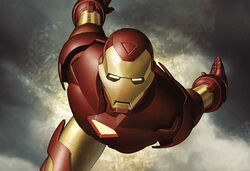 Due to the Extremis suit Tony can control the armor by thought and can use this to have the suit latch on to him. This suit is used in various missions.This suit is very slim and does not have very much fire power.

This is considered one of the most popular suits known recently by comic book fans.

Retrieved from "https://ironman.fandom.com/wiki/Armors?oldid=80221"
Community content is available under CC-BY-SA unless otherwise noted.