The Audi R8 (2016) is a car model produced by Audi and owned by Tony Stark. It first appeared in Avengers: Age of Ultron.

After the restructuring of the Avengers, Tony Stark took a leave of absence from the team. He drove to the Avengers Compound in the car and summoned it by remote control when he left.

During the Avengers Civil War, Tony still utilized the same car as his primary means of transportation. He used to return the Avengers Compound upon his return from Siberia. 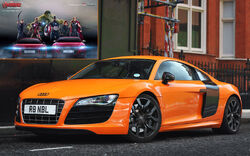 Retrieved from "https://ironman.fandom.com/wiki/Audi_R8_(2016)?oldid=88326"
Community content is available under CC-BY-SA unless otherwise noted.