Blizzard is identity of two supervillains who have battled Iron Man.

Blizzard is one of Iron Man's oldest foes, with the original incarnation being introduced six issues after Iron Man's own debut. However, he initially appeared to be a one-off villain, using the name Jack Frost and would not reappear again until 1976, when he finally finally debuts as Blizzard in two-parter that ran through Iron Man #86-87. This would be followed by Marvel Team-Up #56, where he teams up with Electro to fight Spider-Man and Daredevil. He managed to rise above "Villain of the Week" status with the acclaimed Demon In a Bottle storyline (Iron Man #120-128), where he had a fairly good amount of "screen time" (appearing in issues #123, #124, #126, and #127). Ironically, it would also be something of a "last hurrah" for the original incarnation of the character. He next appeared in The Incredible Hulk #249 (1980), where he appeared to be killed in an avalanche. He made one more appearance, in Amazing Spider-Man Annual #20 (1986), where he was unceremoniously killed off. This was during the tenure of Mark Gruenwald, who was notorious for killing off supervillain characters he deemed to be too minor, redundant, or ill-conceived.

A new Blizzard was introduced the following year in Iron Man #223, part of the Armor Wars Prelude. His "underdog" status clicked with fans in a way the original couldn't, and it is this incarnation that became a prominent fixture in Iron Man's rogues gallery, appearing far more regularly than his predecessor.

The first Blizzard was Dr. Gregor Shapanka, a Hungarian scientist who made numerous breakthroughs in cryogenics - flash-freezing living organisms and thawing them out later without any known medical side effects. As Shepanka's cryonics slow the aging process of his subjects, he becomes convinced that his work could become the key to unlocking immortality.

Shapanka's prestigious academic background gets him a job at Stark International's Long Island Facility, but his obsession with achieving immortality causes many of his peers to consider him mad. Frustrated at his inability to acquire funding for his research, Shapanka attempts to rob the facility's vault. He inadvertently sets off the security systems, which attracts the attention of Iron Man. Shepanka is armed with a revolver, which is useless against Iron Man's armor, and he is quickly disarmed. Not knowing that Iron Man and Tony Stark are the same person, Shepanka offers the Golden Avenger a chance to benefit from his breakthroughs from the ground floor. Shepanka is dismissed as a madman and knocked out. When he recovers, Stark, now having changed back into normal business attire, fires him from the company, but opts not to file criminal charges in light of his years of good work. When Shepanka suggests a severance package, Stark suggests the Professor leave before he gets "cold feet" about releasing him. This comment somehow inspires him to create a cryosuit which he uses to commit several bank robberies in New York. Resembling a walking ice stature, he is dubbed Jack Frost by the media. He then attempts to raid Stark Industries, but is defeated by Iron Man.

Several years later, Shapanka returns with an updated suit and using the alias Blizzard. He again attempts to steal from Stark Industries and is once again defeated by Iron Man. Shortly thereafter, Shapanka reconstructs his cold-suit in prison; but when Electro uses his electrical powers to break out of the adjoining cell, Shapanka is caught in the blast and the suit is fused to his body. Electro and the Blizzard then join forces to take over the Daily Bugle, but are stopped by Spider-Man and Daredevil. Some months later criminal mastermind Justin Hammer hires the Blizzard to join an army of supervillains and battle Iron Man, who subsequently beats the Blizzard twice in a matter of days.

The Return of Jack Frost

Shapanka's body eventually mutates, developing real cryonkinetic abilities without the assistance of technology, as well as some latent psionic abilities. Feeling detached from humanity, Shapanka resumes his Jack Frost identity and retreats to an ice palace within the Rocky Mountains. However, the The Hulk, having rematerialized in the mountains after an adventure in the Microworld, discovers Frost and the two do battle. Shapanka is presumed destroyed in the ensuing avalanche.

Shapanka later resurfaces alive, but appears to have lost his genuine cryokinetic powers, prompting him to resume his career as the Blizzard. He attempts to set up a criminal base in New York, but his operations are thwarted by Spider-Man. Blizzard then mistakes a villainous version of Iron Man from Earth-8410 for the modern Iron Man and attempts to ambush him. The future Iron Man, however, is on an urgent mission and instantly kills the Blizzard with a repulsor blast.

The second Blizzard is an American career criminal and mercenary named Donnie Gill, who was fitted with an upgraded version of Dr. Shapanka's armor by Justin Hammer.

Motivated primarily by money, and having a fairly average intelligence level, Gill had little ambitious beyond serving as hired muscle for Hammer. His early career was hampered by inexperience, but he made up for this by his determination and loyalty to his teammates. Gill's loyalty to Hammer wavered, however, during a turf war between Hammer and Ghost. Ghost's sabotage had put Hammer in a vulnerable position where Iron Man could finally bring him to justice for his many crimes. Eager to secure his freedom, Hammer shifted blame to the various supervillains he had financed over the years, including Blizzard.

Gill alternated between robberies and freelance hired muscle jobs for various employers but found himself with the same "jobber" reputation that plagued his predecessor. A turning point arrived after Gill narrowly escaped with his life during a battle with the Avengers, only to be cornered by She-Hulk. They drowned their sorrows in a bar, where they eventually passed out. Gill awoke captured, eager to turn his life around. Attempting to reform, he joined the Thunderbolts, but his armor was damaged beyond repair in a battle with the Grandmaster. Though fully pardoned for his past crimes, Gill found himself embittered as the chance to redeem himself as a hero had been taken away from him.

Gill's retirement proved short-lived, however. His old partner-in-crime, Whirlwind, had joined Living Laser, Ezekiel Stane, and an impostor Blizzard had joined forces with the Mandarin in exchange for some upgrades, but had ultimately joined forces with Iron Man after they realized the true extent of the Mandarin's insane plans. The Mandarin and the impostor Blizzard both perished in the battle, but Whirlwind escaped despite his injuries, salvaging some leftover tech from the battle. This was enough for him and Gill to resume their criminal careers, successfully robbing the Wakandan National Bank. They are approached by Spymaster, who is assembling a team for a heist: With most of the Avengers on a mission in space, the Mansion is mostly unguarded, so he is assembling a team to steal a set of Iron Man armors for a mysterious buyer. While in the middle of planning the heist, Gill collapses - it turns out that he's an Inhuman, and he is now finally undergoing Terragenesis. Gill awakens from his transformation with genuine cryokinetic powers, as well as new electrokinetic abilities. Though he now feels compelled to a calling higher then being a super-powered hired-thug, Gill nevertheless agrees to complete the heist, joining Whirlwind, Firebrand, Unicorn, and Whiplash. The mission meets complications in the form a skeleton crew at the mansion, the aforementioned Iron Man armors activating as part of an anti-theft protocol, and the real Iron Man. Gill used his newfound powers to buy time for his teammates to escape, leaving him captured and placed in SHIELD custody. He spent some time in SHIELD's Pleasant Hill containment facility, but escaped in a riot instigated by Baron Zemo.

Switching to an updated version of Dr. Shapanka's Mk 1 armor, Gill re-emerges as an Acolyte of the cyborg demigod Korvac. With Korvac's agenda of bringing peace and harmony to the universe, it appears that Gill has found the higher calling he had been looking for.

Gregor Shapanka was initially a normal human with no extranormal abilities. His original "Jack Frost" cryosuit was simply a blue jumpsuit with a red backpack. The backpack had an adjustable jet nozzle which emitted supercooled compressed air, but he was limited to encasing his victims in oxygenated ice. The cryogenic battlesuit he wore as Blizzard set the standard for the ones that followed. It contained micro circuited cryogenic units that enabled him to project an intense cold through the ducts that encircled his gloves. He could create powerful ice based attacks, such as shards that could impale an opponent, or a powerful ice storm attack which not only reduced the visibility of the battlefield, but also generated massive splash damage. All of the Blizzard cryosuits give the wearer an immunity to bullets, as the cold causes them to lose their velocity and shatter.

Donnie Gill likewise was a normal human at the start of his criminal career, relying on cryogenic battlesuits with the same abilities as Shapanka's but were upgraded to be more powerful. After he mutated into an Inhuman, Gill developed the ability to manipulate electrical currents.

"Consider it a mission of vengeance, Iron Man — the righting of a wrong you did to a man you no longer even remember!"
―Blizzard I

"I came here to dream, creature, and you interrupted my dreams by tramping brutishly through my world of fragile beauty! I thought I would be safe here, away from a warm-blooded world which no longer held a place for one such as I!"
―Blizzard I confronted by the Hulk

"And it's times like this that don't make me feel so much like a so-called super villain... But instead more like a kid again. One that's waited all day for his parents to leave home so he can invite his buddies over a throw a party he's not supposed to. Of course, in this case... My parents are the Avengers"
―Blizzard II

"This is my chance. To maybe be part of something bigger for once. Something important for once. I have to take it."
―Blizzard II

There has never been any explanation as to how Shapanka gained his cryokinetic powers. Or how he lost them. 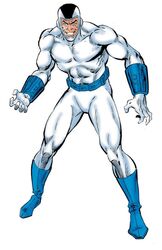 Retrieved from "https://ironman.fandom.com/wiki/Blizzard?oldid=90177"
Community content is available under CC-BY-SA unless otherwise noted.