The Bugatti Veyron SS, or fully known by it's model name as the Bugatti Veyron 16.4 Super Sports 2010 World Record Edition, is a famous supercar, and sports car model of the car brand, Bugatti.

It was one of Tony Stark's latest cars and can be seen in his garage in Iron Man 3. The car was destroyed along with the Tony's White Audi R8 e-tron during the attack on Tony's Malibu Mansion by the Mandarin's forces.

The Bugatti Veyron SS could be seen in his garage near the far end, parked next to the White Audi R8 e-tron as Tony was testing out the prehensility of the Mark 42 armor. 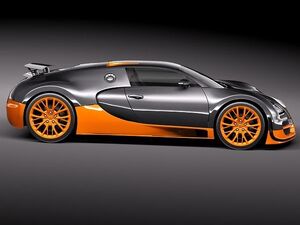 Retrieved from "https://ironman.fandom.com/wiki/Bugatti_Veyron_SS?oldid=78481"
Community content is available under CC-BY-SA unless otherwise noted.