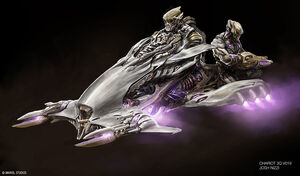 The Chitauri are a race of aliens that appeared as the secondary antagonist in the movie The Avengers. The race are based out on the name of the same race in the comics.

The Chitauri Army is an army of Chitauri led by The Other, and is composed of three different units.

Retrieved from "https://ironman.fandom.com/wiki/Chitauri?oldid=88345"
Community content is available under CC-BY-SA unless otherwise noted.