Agent of S.H.I.E.L.D., Hero, Member of the Avengers, Murderer, Father

Clint Barton, also known by his codename as Hawkeye or Ronin (as of Avengers: Endgame is an Agent of S.H.I.E.L.D., and is a hero, as well as a part of the Avengers Team.

Clint Barton has played in many movies, including Avengers, Avengers: Age of Ultron, and Captain America: Civil War.

Clint Barton Born in April 12 1972 is a wisecracking SHIELD agent. On more than one occasion he was been known to disobey rules and protocol to follow his own conscience in a situation.

He was a devoted father and husband to his family while also being very empathetic and forgiving as shown in his bonding with Wanda Maximoff and becoming a father figure to her.

He was not without his flaws, however, as he refused to take responsibility for his actions should they land him in trouble. As seen during his time on the Raft, he blamed Tony for his situation despite the fact that Sokovia Accords being signed by over 100 countries with Tony having no influence on them.

He was also slightly hypocritical, being angered at Loki for brainwashing him but showing little emotion for Wanda doing the same to his teammates.

Barton uses a bow and arrow. The arrows have interchangeable tips such as grappling, normal, bomb-tip, arrows that shoot bullets sideways, and many, many more.

He is also a master archer, capable of even blowing up a fast-moving Chitauri ship with just a normal arrow while looking in the opposite direction.

Barton was placed under Coulson's command to investigate the site of a hammer crash in New Mexico. He witnessed Thor overpower the S.H.I.E.L.D. forces and lined up a shot but was ordered to stand down.

When the Tesseract was being studied, he was assigned to guard the scientific staff studying the artifact before being brainwashed by Loki and forced into servitude.

He continued to serve as Loki's right hand man, stealing iridium from Germany and leading an assault on the Helicarrier before Natasha overpowered him and knocked him unconscious, thereby freeing him from his brainwashing.

Joining up with the Avengers, he coordinated Chituari flight patters with Tony in Manhattan. When the battle was over, he left to return home to his family.

He was called back into action two years later when HYDRA revealed itself.

In Sokovia, he was injured by an energy weapon only to be brought to cover by Natasha and Thor. He later took part in a game to try and lift Mjolnir before Ultron revealed himself and attacked the Avengers.

When Ultron was tracked to South Africa, he assumed a high position to fire arrows at targets before firing a sonic one that knocked out all of Klaue's men. Wanda Maximoff tried to brainwash him but he managed to plant a taser arrow on her forehead, incapacitating her. He was then knocked down to a lower floor by Pietro (Quicksilver) before he carried Natasha and the other to safety while Tony brought down a brainwashed and rampaging Hulk.

Faced with a lack of options, he flew the Quinjet back to his house where he introduced his team to his wife and children, much to their shock. When Bruce deduced Ultron might go after Helen Cho, he was assigned to to South Korea to protect the doctor and stop the A.I.

During the battle he was relegated to air support before he was ordered to evacuate with the body Ultron had been creating.

Back at the tower, he witnessed the birth of the Vision before he managed to pick up Natasha's signal in Novi Grad indicating where Ultron had retreated to.

After the city had been lifted, he gave Wanda a pep talk when she became shocked by what she had caused Tony Stark to unleash. The talk payed off as she saved his life before all the Avengers rallied around the core to prevent Ultron from using it to destroy Earth. When all the Ultron Sentries had been destroyed, Clint returned to the S.H.I.E.L.D. lifeboats where he aided civilians to board.

Running back to the city to save a small child, he caught sight of Ultron's hijacked Quinjet firing into the city. He was about to sacrifice himself to save the boy before Pietro pushed him out of the way, saving them both but expiring in seconds from the powerful artillery.

Taking Pietro's body back with them as they left Sokovia, Barton returned to his farm intending to retire and spend more time with his family.

His retirement would not last long, however, as Steve Rogers soon called him back into action to break Wanda Maximoff from her protective custody in the Avengers Compound. He was easily overpowered by Vision before Wanda managed to overpower the android allowing both to escape. He also picked up Scott Lang before all three went to rendezvous with Captain America in Germany.

There they were confronted by the Avengers who had signed the Accords, who then demanded the rogues surrender lest lethal strike teams be sent after them. Captain America refused to back down and compromise, sparking an all out brawl between the Avengers. During the battle, Clint fired an explosive arrow at the Mark 46 doing no damage to the suit before he fought Black Widow. He later fired Ant-Man into the Mark 46 only for the size shifter to be ejected from the suit in seconds. When Ant-Man grew to giant size, Barton fought against Black Panther only for his weapons to be destroyed. He was then knocked unconscious. Defeated, Barton was placed in the Raft.

When Tony Stark came to the Raft so as to speak to Sam Wilson, Barton made clear how angry he was with Tony for looking them in the prison. Tony however had very little patience for Barton saying he should have thought of his family and read the law before making any rash moves. This dismissive attitude enraged the archer who slammed on his cell and made clear he blamed Tony for everything that had gone wrong. The Avengers leader didn't even turn to look at Barton for the remainder of his visit.

Stewing in his cell, Barton was freed by Steve Rogers with the result of having to go on the run. 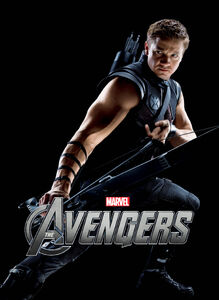 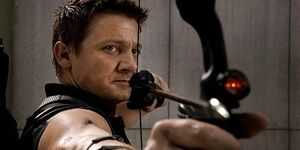 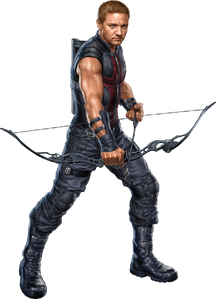 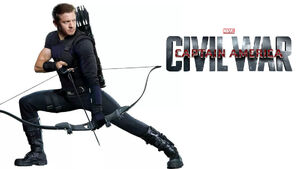 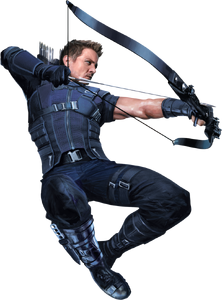 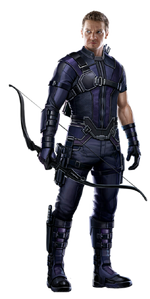 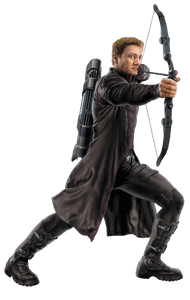 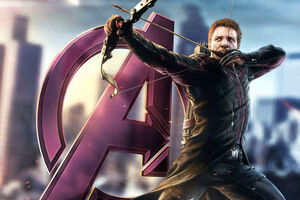 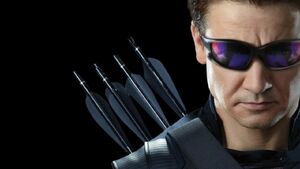 Retrieved from "https://ironman.fandom.com/wiki/Clint_Barton_(film)?oldid=88351"
Community content is available under CC-BY-SA unless otherwise noted.