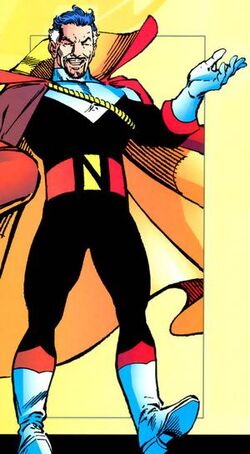 Count Nefaria is the leader of The Maggia, an evil crime organization. He appears in Iron Man: Armored Adventures as the leader of the European crime orginization. His mortal enemy, the Mandarin, leads the Tong. Both factions want power over the New World. He appears in 'Pepper, Interrupted'. He is a pristine man with a white suit and a cane, plus a forked beard and a sharp, angular face. The Mandarin called Tony in to rescue Pepper, who was captured after following Gene to the meeting place. Remember, Gene is the Mandarin. Tony instead engages Count Nefaria's Black Knight, and the engage in an air battle. Gene is forced to transform back into himself and rescue Pepper. The Black Knight and Count Nefaria were captured.

Later, Justin Hammer transforms Count Nefaria into a zombie with his Z Gas.

Retrieved from "https://ironman.fandom.com/wiki/Count_Nefaria_(Earth-616)?oldid=49694"
Community content is available under CC-BY-SA unless otherwise noted.