The Crimson Dynamo is a character that appears in the comics, and is a member of Iron Man's rogues gallery. The role of the Crimson Dynamo has been taken by many identities, the first of which was the famous Anton Vanko.

Vanko was a vain and cocky man, but he redeemed himself in the end. In their first encounter, the Crimson Dynamo battled Iron Man.[1] After being tricked by Iron Man (who made him believe that his Soviet handlers were going to kill him though earlier Vanko's superior implied he was going to kill Vanko, anyway), Vanko defected to the U.S. and went to work for Tony Stark as one of his chief scientists. Soon the Soviets came to kill him for real. They sent their top agent, the Black Widow, and her one-time partner, Boris Turgenev, the latter of whom stole the armor and became the second Crimson Dynamo. Vanko died saving Iron Man by firing an unstable experimental laser light pistol at Boris, killing himself as well.[2]

Vanko's heroic sacrifice was re-visited in the mini series Enter the Mandarin where it's revealed that The Mandarin's son, Temugin was witness to Vanko and Turgenov's death.

Boris Turgenov, the second Crimson Dynamo, had a very short career in the super villain game. In his first and only appearance[2], Turgenev came to the United States with his one-time partner, the Black Widow, to kill Anton Vanko, Tony Stark, and Iron Man. Stealing the suit, he almost carried out his mission, virtually defeating Iron Man. He was killed by Vanko, who, sacrificing his own life for the cause of freedom, fired an experimental and unstable new laser pistol, killing Boris.

Although often mistakenly referred to as the second Crimson Dynamo, Alex Nevsky (also known as Alex Niven) was actually the third man to go by the Crimson Dynamo name. Introduced as the American Alex Niven, he was Cord Industries' hot new scientist, but he was scheming from the start, aiming to take down Tony Stark.[3]

But his story actually began behind the Iron Curtain. The protégé of Professor Anton Vanko, he admired and respected the brilliant scientist, who created the Crimson Dynamo battle-suit. After Vanko defected to the West, all who knew the traitorous genius were tainted under suspicion of disloyalty. Nevsky's promising career was ruined and he fled. In exile, Nevsky learned to hate the government that he had once loved, the government that turned on him so quickly without proof. He also sought vengeance against the man who toppled his mentor: Iron Man. He also wanted to destroy Stark, because the capitalist had exploited Vanko.

His plan was fairly simple: As Alex Niven he would go to work for Cord Industries, using his brilliance to help the struggling company beat out Stark Industries in the marketplace. He would then go after Iron Man, besting him with a new and improved Crimson Dynamo armor. (He actually fought two different men inside the IM armor: Eddie March and Tony Stark.) He also worked against Stark by romancing Janice Cord, with whom he later fell in love for real.

After he donned the Crimson Dynamo armor in public,[4] his old Soviet masters sent the Titanium Man to kill him. When the Titanium Man killed Janice, Niven blamed Iron Man for the tragedy and swore to avenge her.[5] Although he held Titanium Man just as responsible for Janice's death, Niven was forced by circumstance to partner with him and Radioactive Man in Vietnam, where all three Communist-aligned fugitives formed the Titanic Three.[6] Nevsky also defected to Vietnam and lived in Saigon. Nevsky made an unsuccessful attempt to kill Iron Man[7]. Fleeing the battle, Nevsky disappeared soon thereafter. He was assassinated by the KGB, who confiscated his armor for their own purposes.[8]

Yuri Petrovich, the fourth Crimson Dynamo, was the son of Black Widow's partner Ivan Petrovich. When Western agents (presumably Americans) failed to convince Ivan to defect to the West, they assassinated Yuri's mother; in the chaos that followed, Ivan and Yuri each believed the other dead. Yuri was brought to the West, where Soviet agents, posing as Westerners, indoctrinated him to hate the West. When the Black Widow and Ivan defected to the United States, Yuri was "rescued" by the Soviets, returned to Russia, and trained as a KGB assassin. He was given the Crimson Dynamo armor and sent to kill the Widow and Ivan. Yuri and his allies (his girlfriend Darkstar, the Griffin, Rampage, and the original Titanium Man) fought the Widow and her teammates, The Champions. When Yuri learned of the true nature of his "Western" captors, he went berserk. Darkstar teamed with the Champions in order to subdue Yuri, and after he and his other allies were defeated, he was returned to Russia, convicted by the Soviet government, and exiled to a Siberian labor camp.[9]

Dmitri Bukharin, the fifth Crimson Dynamo, was given his armor by his masters in the KGB. He joined the Soviet Super-Soldiers, but was expelled when his teammates learned of his loyalty to the government that had betrayed them. He later joined the Supreme Soviets, a group of superhumans who were loyal to the Soviet government; the group became the People's Protectorate after the USSR dissolved. When the government confiscated his armor, he was given a new suit of armor and adopted the codename Airstrike.

Valentin Shatalov, a Colonel-General in the Soviet Army and KGB agent, first appeared in Iron Man #255 (April 1990) . He used his rank to obtain the Crimson Dynamo from Dmitri Bukharin for his own use. He was a member of Remont 4.

He and his allies (the cyborg Firefox and the original Unicorn) revived the original Titanium Man and fought the Soviet Super Soldiers and a group of Russian mutant exiles. He was later apparently allied with the Red Skull, although this may have been yet another Crimson Dynamo. After the death of the first Titanium Man, which was blamed on him in a political move, Shatalov was relieved of his duties as Crimson Dynamo. Then Shatalov Sweared revenge against them and a few years later was able to achevie it. He and his wife (he met her a few years back after he swear revenge) made a new set of Crimson Dynamo armor and together exploded the base but there was a price they both died.

Wearing the former armor of Dmitri Bukharin, this Dynamo's identity is Gregar Valski. His skill with the armor was minimal, and he was deftly handled by both Nick Fury (whom his employer had earlier brainwashed) and Captain America.

The Eighth Crimson Dynamo was Russian collegiate Gennady Gavrilov, who found the helmet of a suit designed by Anton Vanko - a 'Beta unit', based on but improved over the original, with its very own recharging satellite in orbit. Believing the helmet to be a sophisticated gaming system, Gavrilov caused the dormant armor to awaken and make its way towards the helmet, inadvertently leaving a trail of destruction. He would eventually, if briefly, wear the entire armor in a standoff with the Russian military. He kept the armor afterwards, but it is unknown if he ever wore it again.

Very little is known of this new Dynamo. Exactly what the armor is capable of and who is inside of it are both presently not disclosed by the storywriters. Presumably, his armor was either given it or had it upgraded by Tinkerer. This version first appeared in the Secret War miniseries, written by Brian Michael Bendis.

In this storyline, this version is united with various other technologically inclined villains against the The Avengers. The above battle continued, even after the Fantastic Four arrived to assist the heroes. Eventually Lucia von Bardas caused all of the villains' armors' energies to join together in a chain that would have caused a massive explosion. The chain reaction was broken up by S.H.I.E.L.D. when Daisy Johnson killed Bardas. Crimson Dynamo and the other villains survived and were taken to hospitals.

The next Crimson Dynamo appearance was in Iron Man vol. 4 #7. The full capabilities of this version of the armor remain unrevealed, though it appears to include a high degree of resistance to injury, super strength and explosives. Crimson Dynamo robbed a bank in New York only to be attacked by Iron Man, who knocked the villain through a wall. Dynamo grabbed a nearby construction worker and Iron Man hit him with a full repulsor burst that stopped the villain's heart. Iron Man then restarted the Dynamo's heart before turning him over to the authorities. He was later hired to provide protection for Russian mobster Sergei Antonov, and perished in a three way battle between Daredevil and the Punisher (who had both been pursuing Antonov for different reasons). It was later revealed that this armor had been bought on the black market, and that the designs for Crimson Dynamo-based technology have been for sale for a while.

The eleventh Crimson Dynamo was a member of the Alpha Gen Soviet Super-Soldiers and was put into cryogenic stasis where it would remain until it was awakened after a nuclear explosion was detected. After the Cold War ended, the base where it was positioned was abandoned, leaving him and his comrades. During a fight between the Order and the Infernal Man, Order member Corona set off an enormous explosion which was detected as a nuclear blast, activating the Soviet Super-Soldiers. They confronted the Order on their way to California. On Dreknov Island, Calamity found the three men controlling the Soviet Super-Soldiers. Unable to kill the three sleeping men due to moral values, Supernaut was sent to finish them off. Aralune, sensing they only had one chance left, ate the bomb and absorbed the blast. The blast apparently destroyed the Crimson Dynamo.

Recently, in War Machine: Weapon of SHIELD, the new Crimson Dynamo was seen ignoring orders from his superiors and helping War Machine defeat invading Skrulls. He parted on good terms with Rhodes.[10]

The Crimson Dynamo wears an armored battle-suit that serves as an exoskeleton, providing the wearer with superhuman strength and durability. The suit's outer layer was composed of a carborundum matrix alloy, and is equipped with hand-blasters that can fire high-frequency electrical bolts, small missiles contained in the back shoulder area of the battle-suit, computers and radio transmitter and receiver, boot jets that allow flight. Subsequent versions of the battle-suit have featured upgrades of various kinds, by the Gremlin and other Russian scientists. As Crimson Dynamo, Valentin Shatalov's version of the armor was equipped with a powerful chest-mounted fusion-caster weapon.

A Crimson Dynamo was a member of the Soviet-Soldiers.[11]

The Ultimates featured a Chinese Dynamo, named Alex Su, as a member of The Liberators. Based on similar technology to Tony Stark's Iron-Tech he is unable to exit his armor, having been fused inside, but can supposedly use it to control up to 50 giant-sized drone versions (which are revealed to be piloted independently.) He is apparently killed when Tony Stark vaporizes him while piloting the Iron Man Six aircraft.

Major Valentin Shatalov appears in Ultimate Fantastic Four #47. He is based in a shack in Siberia, and has apparently been out of contact with his superiors for a long time, becoming entirely self-sufficient. When he is given the order to activate his armor he has forgotten correct procedure, and his contact was not even sure he was still alive. Reed Richards reports that this Crimson Dynamo is an "Eastern Bloc version of Iron Man", making the latest Ultimate version extremely similar to the original character. He has joined forces with the Fantastic Four to defeat the Red Ghost. 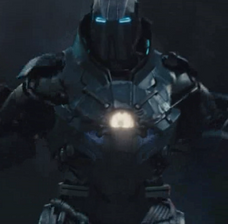 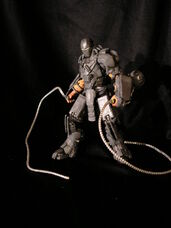 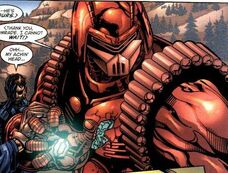 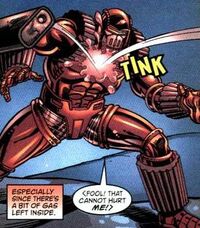 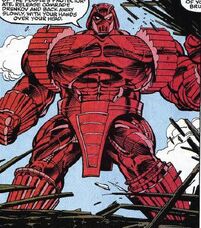 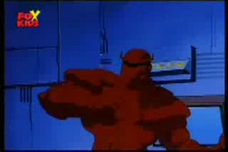 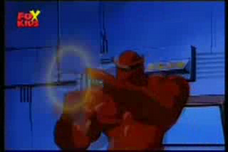 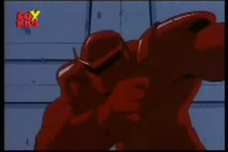 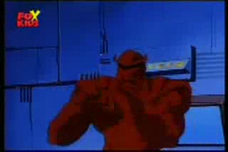 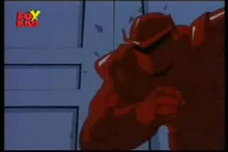 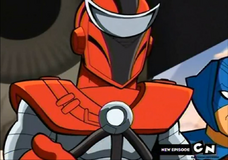 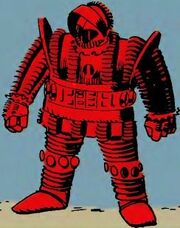