Doctor Doom is a Marvel Comics character created by Stan Lee and Jack Kirby. He is the current leader of Latveria, a role which often makes him the wild card of the Marvel Comics Universe. Initially created to serve as the arch-nemesis of the Fantastic Four, he has subsequently clashed with other heroes such as Spider-Man, Captain America, and Iron Man. He has also often allied with many supervillains, such as the Red Skull. Often considered as a supervillain, in more recent years Doctor Doom has been depicted as an anti-hero.

Victor von Doom was born in Haasenstadt, Latveria, to Werner and Cynthia von Doom. Werner was a doctor, while Cynthia was a practitioner of sorcery. As members of the House of Zefiro, a clan of Romani heavily persecuted under the tyrannical reign of King Vladimir. In attempt to gain magic powerful enough to overthrow the King, Cynthia made a bargain with the demon Mephisto. Like countless others who bargain with the Prince of Lies, Cynthia learned too late that she had gotten a raw deal, and her soul end up imprisoned in the Netherworld. Werner fell victim to the King's death squads not long after, leading young Victor under the care of longtime family friend Boris Karela. Boris attempted to steer Victor into following his father's footsteps in science and medicine, but the boy ultimately had too much anger in him. Victor nevertheless did passionately study the sciences, in addition to sorcery, and saw a scholarship program offered by Hegeman State University in New York as a means to a better life. While at HSU, Victor developed a fierce academic rivalry with another student, Reed Richards, who shared his fascination with the often scoffed at field known as Quantum Entanglement: Victor had come to believe that harnessing the energy of these particles could enable him to free his mother from the Netherworld. Constructing a machine that he believed would enable him to freely travel between dimensions, Victor ignored Reed's comments about the calculations "being a little off." This proved to be a massive understatement, as the machine literally blew up in Victor's face. After learning of this unauthorized experiment, HSU expelled Victor for reckless endangerment, and he fled the United States embittered, blaming Reed for the accident and hiding his disfigurement behind masks and bandages.

After spending several months hiding from the authorities and attempting to build up resources, Doom heard of a secretive order of monks who were waiting in the Himalayas for a prophecized masked man from a faraway land to come to them and become their leader. Doom sought this order out, eventually finding their monastery. The monks proved to be highly skilled in both science and magic. Doom studied with them for five years, eventually mastering and surpassing their abilities. They fashioned a suit of armor for him, designed to reflect his status as a "cold warrior of logic" that blended the high tech with the old world. Doctor Doom was born. Armed with his newfound resources, Doom returned to Latveria and slew King Vladimir, claiming the throne of Latveria for himself.

Doom eventually learned that his old rival Reed Richards had been endowed with cosmic powers and was now the superhero Mister Fantastic, one of the Fantastic Four. As Doom opposed them, he soon noticed they were gaining new allies, such as Spider-Man and Ant-Man. When he learned that a second superhero team, the Avengers, was being formed, with Ant-Man joining Iron Man, Thor, Wasp, and the Hulk, he saw them as a threat that he needed to preemptively neutralize. He has his spies within the United States Air Force get an armored zeppelin (impounded after a recent defeat by the Fantastic Four and Ant-Man) back into the air and has it flown to international waters. There he sets a trap for the Avengers. When they are called into investigate the "Flying Fortress," Iron Man makes his way to Doom, only to be crippled by an attack that siphons energy from his armor's life support system. Ant-Man, Thor, Wasp, and Hulk are imprisoned in containment cells that are designed to nullify their powers. But Doom had miscalculated Ant-Man's size-shifting abilities; Dr. Pym uses his previously untested ability to transform into Giant Man to escape confinement and free his teammates. The quintet make short work of the Fortress' security and corner Doom. But it turns out he is not actually there - he has been speaking through an android decoy. Hulk smashes the "Doombot", which triggers a failsafe that places the ship on self-destruct. The Avengers narrowly escape the Fortress before it explodes, but Doom now has a fair assessment of their strengths and weaknesses.

After learning of the mind control abilities of Zebediah Kilgrave, aka the Purple Man, Doom kidnaps Kilgrave and places him the Psycho Prism, which amplifies his hypnotic abilities to the point where they are able to affect virtually everyone on Earth. Using this newfound power, Doom is able to crown himself Emperor of the World, with Namor as his general hunting down the few threats to his rule. Ultimately, the only ones capable of resisting Emperor Doom are the Avengers, at the time comprised of Captain America, Iron Man, Wasp, Vision, Scarlet Witch, Hawkeye, Mockingbird, Tigra, Wonder Man, and Starfox. But Doom's regime has solved many of the world's social ills, such as global hunger and political corruption, meaning that they have little interest in ending Doom's reign. Wonder Man ultimately proves immune to Doom's control, and eventually manages to free his teammates from the Psycho Prism's inmates. Doom, meanwhile, had become bored with his success, as he had found that the challenges of maintaining this new order were not nearly as rewarding as the challenges he faced as a would be conqueror. Consequently, he allowed the Avengers to destroy the Psycho Prism, returning the world to normal, while he escaped with the satisfaction of knowing that he could indeed conquer the world if he really wanted to.

Cured of his disfigurement and fully embracing his magical birthright, Doom renounces his vendetta against the Fantastic Four and abdicates the throne of Latveria, feeling that he has been called to a higher purpose. Doom is encountered by Iron Man when the latter travels to Latveria in search of Madame Masque, who had been retrieving magical artifacts in an attempt to empower herself. Iron Man does not recognize him at first, as he is wearing normal business attire and using magic to protect himself instead of armor, but Doom confirms his identity by recalling their adventure in Camelot, and uses his magic to effortlessly shrug off Iron Man's confused, instinctive attacks. The two join forces to track down Masque, who had inadvertently been possessed by one of her artifacts. Doom uses his magical abilities to exorcise her. Later, during the second Superhuman Civil War, Doom confronts Stark, depressed over the tragedy he has experienced in the conflict, in an attempt to get him to refocus and regain his footing. Stark uses his containment technology to entrap Doom, demanding to know his greater purpose. Doom reveals that all the numerous times he had achieved nigh omnipotence for self-serving reasons has left him unfulfilled: If selfish acts of ultimate power were not his true calling, then perhaps he was intended to uses his talents to be a force for good in the world.

In the aftermath of the war, Doom has taken up the mantle of Iron Man in Stark's absence.

The Return of Tony Stark

Although many assume Doom to be a normal human with no extranormal powers without his armor, he is actually an accomplished sorcerer, having been trained by the likes of Morgan le Fey and Doctor Strange. He also has some psionic abilities, such as telekinesis, levitation, and technopathy. His armor is consecrated to provide the perfect blend of science and magic. It enables him to go toe to toe with Spider-Man, the Hulk, and Iron Man's various armors, and is also capable of withstanding a blast from an Infinity Gauntlet.

"Before this day is ended, mankind shall grovel helplessly at my feet -- and, as fate has obviously ordained -- Doctor Doom shall be Master of Earth!"
―Doctor Doom, man of ambition

"My sense of fair play extends only to the limits of the match -- and now that the game has concluded, I have no qualms whatsoever about multiplying the odds... in my favor."
―Doom, man of his EXACT word

"If the nations of the Earth cannot stop squabbling like spoiled children long enough to control the forces they have so foolishly unleashed -- then Doom shall take their deadly toys away from them!"
―Doom sets out to save the world from itself

"I am here because I figured out what I have to do. I will pick up your mantle. I will be Iron Man."
―Doom becomes Iron Man 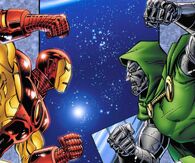 Retrieved from "https://ironman.fandom.com/wiki/Doctor_Doom?oldid=90279"
Community content is available under CC-BY-SA unless otherwise noted.