Dum-E and U are the robots Tony Stark uses as assistants in his workshop. He made Dum-E in his father's workshop. While Dum-E is generally used to help with Tony Stark's creations, U is used to do the registration of Stark's work using a video camera. They had even saved his life, yet Stark constantly gets angry at the robots. Dum-E and U had helped make some of Stark's armors.

Tony Stark created Dum-E in his father's workshop. The robot seemed useful, so Tony kept it.

After Tony Stark escaped from captivity, Dum-E and U helped him make the Mark II. When Obadiah Stane decided to steal his Arc Reactor, Stark almost died and went to his garage to get the arc reactor on a mantle that Pepper Potts made for him. He was unable to reach it and gave up, but Dum-E gave it to him and saved his life.

Tony Stark used U to serve champagne when he appointed Pepper Potts as his successor and new CEO of Stark Industries.

After Stark learned of a new element discovered by his father, he decided to rebuild the element to fix his current arc reactor. Dum-E helped him make the element. Afterwards, Stark tasked Dum-E with cleaning up the mess that the new element's creation caused.

While Stark was testing the Mark XLII, he gave Dum-E a Dunce cap for something it had done.

When Tony Stark's Mansion was destroyed, both Dum-E and U were destroyed as well. When Stark returned to the ruins of his destroyed house, he took the remains of Dum-E and parts of his workshop.

A newly repaired Dum-E was helping Happy Hogan and other workers pack various Avengers items and memorabilia into Stark’s to the New Avengers Facility after Stark sold the Avengers Tower.[ 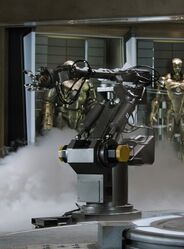 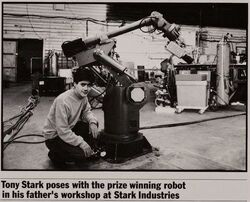