Ezekiel Stane is the son of Obadiah Stane and has been building bio-weaponry and manufacturing next generation weapons for terrorists and supervillains since he was nine.

Fraction states the similarities between the pair's characteristics with Ezekiel being evolution of Tony Stark's character; a younger, smarter, sharper futurist of a post-national corporate world moving into a future that Stark has no control over. Overtaking Stark and his Iron Man technology by not taking the route of armored suits but upgrading the human body itself. Ezekiel Stane first appeared in Matt Fraction's The Order #8 dated April 2008, where he was penciled by Barry Kitson. Within this critically acclaimed but short-lived comic book, Stane was revealed to be the behind-the-scenes manipulator pulling the strings of other villains, including Black Dahlias, Maul and M.A.N. from S.H.A.D.O.W. Androids, who have set out to destroy The Order. The Order being Tony Stark's showcase Initiative team of California, Ezekiel target them as the first part of his revenge on Tony Stark for the death of his father. In the final issue of The Order, #10, Stane meets Iron Man face-to-face for the first time. Due to Stane's life off the grid, Iron Man fails to realize who he is, and despite Tony Stark's resources as Director of S.H.I.E.L.D., Stane leaves California and prepares for the next stage in his vendetta against Stark.

Fraction would follow The Order with a new monthly on-going Invincible Iron Man title, with Ezekiel Stane appearing in its first story arc "The Five Nightmares" to further his vendetta against Tony Stark. Ezekiel Stane is first seen attending a meeting with the Board of Directors of a big tobacco company who had hired him to tweak their tobacco to produce a higher basal metabolic rate in the people that smoked it. Stane says he succeeded in doing it, but reveals he only took the job to use the tobacco company’s money to create bio-upgrades for himself, upgrading his own hypothalamus to utilize energy within the body which Stane swiftly uses to execute the board of directors with energy blasts from his finger tips. Stane is later updated by his girlfriend/assistant, Sasha, on his upgraded African suicide bombers who were the test subjects of Stane's biotechnology.

Stane ultimately confronts Stark with his own unique armor, while also using terrorists armed with his technology to attack sites around the world. However, Stark defeats Stane's plan with his control of all of his various Iron Man armors. Stark then disables both of their armors with a massive electromagnetic pulse and defeats the younger man in hand-to-hand combat. Stark delivers the final emotional blow to the defeated Stane by telling him that his father was "smarter than Ezekiel. And harder to beat." However, Stark is left disturbed by Stane's attack, particularly with the notion of what he may have to become in order to face the future Stane represents.

A Nation Under Our Feet

Stane resurfaces as the weapons supplier for The People, a HYDRA-backed Populist revolutionary movement seeking to overthrow the monarchy of Wakanda. Stane quickly raises the stakes of the conflict by deploying suicide bombers armed with his repulsor technology to the capitol city of Birnin Zana, injuring many, including Queen-Mother Ramonda. King T'Challa, aka Black Panther, recognized the technology and learned of Stane's involvement. T'Challa consults with Stark, who suggests that T'Challa can beat Stane by exploiting his superiority complex. Injecting himself with a series of nanites used by Doctor Doom in an earlier campaign against Wakanda, T'Challa infiltrated the People's base as the Black Panther, used the nanites to infect its security systems, and allowed himself to be captured by the rebels. Stane, flanked by the Fenris twins, revealed that The People were offering a share of their future country to any supervillain who is able to kill the Black Panther. The nanites transmitted this speech throughout the web, revealing the true face of the revolution, and T'Challa was subsequently rescued by The Crew.

Ezekiel Stane's genius-level intellect and considerable fortune has allowed him to cannibalize and reverse engineer Stark Tech from the black-market to upgrade his own biology, most notably his hypothalamus. Stane successfully reduced the caloric energy consumption of his body from 70% to 9% leaving him surplus energy which he uses in repulsor bolts at the end of his fingers. Other upgrades have allowed his body to vastly repair itself from injury.

This excessive use of the body's energy has shown that Stane must constantly keep his body's blood sugar level high to make up for its rapid consumption. Stane does this by eating a high (20,000) calorie paste.

"Listen fellas, I make and manufacture next gen weapons for terrorists and freak show lunatics. And I'm saying this, as that guy--what you do is completely evil. I might deal to murderers, but you guys--you guys are addicting kids and then murdering them yourselves"
―Zeke Stane, amoral arms dealer, telling Big Tobacco who the real monster is

"This isn't the future of warfare — this is the face of asymmetrical warfare. Welcome to the 21st century."
―Zeke describing his inventions

"The rules break down when you can't improvise in a crisis. That's how I did things. That's how he did things. This is how you win this stuff, man. You literally destroyed a possible alien intelligence, for God's sake. What makes you the hero and me the villain here?"
―Zeke chastises Tony for his black white view of heroism and villainy

"You say you want a revolution, but are you ready for the future, friend? Let me tell you what is coming. Panic in the streets. Fire in the sky. Casualties. Agony."
―Zeke asking the Wakandan Liberation Front if they really have the stomach for his methods 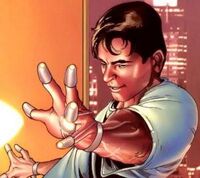 Zeke before his transformation

Retrieved from "https://ironman.fandom.com/wiki/Ezekiel_Stane?oldid=90251"
Community content is available under CC-BY-SA unless otherwise noted.