F.R.I.D.A.Y. , also known as Female Replacement Intelligent Digital Assistant Youth is a natural-language user interface created by Tony Stark, designed to work with his Iron Man armor. She served as Stark's main user interface computer system during the final battle between the Avengers and Ultron in Sokovia and to find information about Helmut Zemo. In contrast to J.A.R.V.I.S.'s voice code which was patterned after a male English accent, F.R.I.D.A.Y.'s is patterned after a female Irish one.

It was made and finished constructed by Tony prior to the death of J.A.R.V.I.S., but never made an appearance in the franchise till J.A.R.V.I.S.'s death.

It is known that the software is developed in C++ and is proprietary. The details of the design remain unknown.

F.R.I.D.A.Y. was first installed into the Mark 45 in the Avengers Tower. The suit schematic changed from red to blue showing that she had been uploaded successfully. During the battle, she gave Tony constant updates on the situation and ran the numbers to theorize his plan for a heat seal to destroy Novi Grad.

During the Avengers' Civil War, FRIDAY continued her role in the Mark 46, informing Tony of the injuries he sustained from Wanda Maximoff's attack and warning him that Scott Lang had breached the suit before removing Ant-Man via fire retardant foam. When Rhodes was injured, she quickly contacted emergency medical personnel to assist him.

She later gave Stark an update that revealed Helmut Zemo was behind everything which prompted him to assist Barnes and Rogers. When the three engaged in battle, she continued to update Stark on the damage sustained by the armor during the fight. When it became clear that Stark could not beat Rogers in hand to hand combat, he had FRIDAY analyze the latter's fighting pattern for weaknesses. Once she did, Stark brought Rogers down in seconds but ultimately lost the fight due to a distraction by Barnes.

Later at the Compound, FRIDAY informed Tony that Ross was calling him.

In the R&D lab of the New Avengers Facility, F.R.I.D.A.Y. aided Tony in running battle tests on his new Mark L suit, testing out the unit's response time to defend him against sudden attacks ranging from physical blows to energy blasts. The tests were interrupted when she informed Tony that Maria Hill was there to see him.

When Ebony Maw and Cull Obsidian arrived in New York City to acquire the Time Stone from Doctor Strange. Unaware of what was occurring, Tony Stark asked F.R.I.D.A.Y. what was happening. She responded that she was working on finding out.

With Doctor Strange captured by Ebony Maw and taken aboard his ship, and Peter Parker hanging on the outside and running out of oxygen, Tony Stark followed in an effort to rescue the Sorcerer Supreme and Spider-Man. In order to catch up to the ship, Tony asked F.R.I.D.A.Y. for "a little juice". The program answered by uniting the propulsors in the Iron Man suit, allowing Stark to gain considerable distance. When the ship almost exited the atmosphere, Stark told F.R.I.D.A.Y. to send the Iron Spider Armor to catch Peter. After the suit successfully attached to Parker's body, Stark told F.R.I.D.A.Y. to send Spider-Man back to Earth. She responded by activating the parachute of the Iron Spider Suit.

Once inside the ship, Tony was contacted by Pepper Potts but quickly lost connection with both her and F.R.I.D.A.Y. due to the increasing range, thus making F.R.I.D.A.Y. unable to assist Tony further.

5 years later, Tony Stark was back with the Avengers and Hulk was going to snap his fingers to bring the trillions that got snapped away by Thanos, Tony Stark ordered F.R.I.D.A.Y to activate barn door protocol, because of the nano gauntlets energy.

FRIDAY's abilities seem to be an upgraded version of J.A.R.V.I.S.' She is fully capable of controlling Iron Man suits as well as assisting Tony in their operation and controlling whole vehicles, like her predecessor, but she displays new abilities as well. She is capable of monitoring the entire internet, able to easily hack into government databases, partially override the Raft's security systems and analyze fighting styles for weaknesses to exploit. 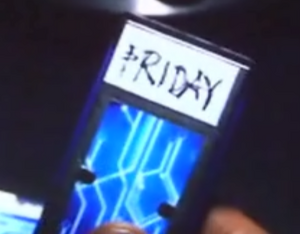 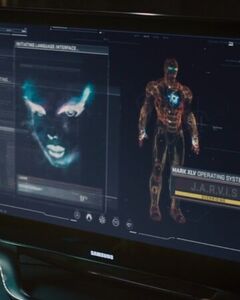