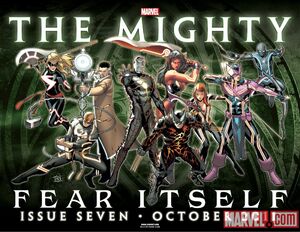 Fear Itself is a Marvel Crossover comicbook event, created and published by Marvel Comics.

When Sin, the new Red Skull, traces the steps of her father to a hidden artifact, it transforms her into Skadi - the demonic daughter of the Serpent, the forgotten Norse god of fear, elder brother to Odin. Now released, the Serpent causes seven hammers of power to crash down on Earth, empowering those souls deemed worthy of their terrible power. The eight worthy, now including Skadi, go forth and rain destruction on the planet, causing the terror that empowers the Serpent. As the heroes of Earth strive to put a stop to the onslaught, Iron Man invokes the help of Odin himself to create divine weapons to oppose the Serpent and his warriors.

These weapons, designed by Tony Stark and created, from Uru, by dwarven smiths, empower nine heroes (called 'the Mighty' in promotional materials), to oppose the Worthy, in a final battle for the fate of all the mortal world.

Thor faces off with the Serpent, slaying him and dying himself; Odin goes into self-imposed exile to guard the remains of his brother in Asgard, while sending his people to live on Earth.

Retrieved from "https://ironman.fandom.com/wiki/Fear_Itself?oldid=90143"
Community content is available under CC-BY-SA unless otherwise noted.