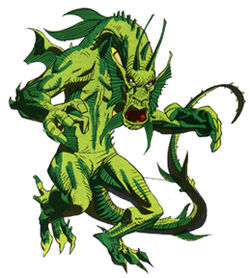 The first time Fin appeared was during the 'Monster age', before super-heroes were widespread; in that instance the dragon, formerly believed to be mythical, was manipulated to attack the army of the People's Republic of China, to fend off an invasion of the island of Taiwan. Many years later, the Mandarin, on advice of the wizard Chen Hsu, also used the dragon to fight the Chinese army and claim a third of the country for himself. But Chen Hsu revealed himself as an alien, of the race of the Kakaranatharans - reptilians who live for thousands of years and can change their shape, but in truth are dragons. Millennia before, Chen Hsu and his band of renegades crashed their spaceship on Earth; one of their number was Fin Fang Foom. Like the others, Fin Fang Foom was undone by the combined power of the Mandarin and Iron Man on that occasion, but months later he managed to return from seeming oblivion, only to be defeated by Iron Man again. He was incarcerated on the 'Monster Island' facility for outsized aliens and other life forms, until he entered a rehabilitation program which allowed him to roam free among the human population, with his size permanently reduced to human and his powers suppressed.

This character possesses super strength, the ability to fly at supersonic speeds via his wings, and can spew combustible acid mist from his mouth. Fin Fang Foom is also extremely durable and can regenerate at a rapid rate. By entering into long periods of hibernation he has managed to survive for many centuries. The character possesses a gifted intellect, can communicate telepathically, and has access to advanced alien technology aboard the Kakaranatharan vessel. His position was that of navigator. He can alter his size, within limits, between his normal colossal stature and about that of a human.

Foom appears in the limited series Nextwave as a pawn of the Beyond Corporation©, and while having reverted back to original size, lacks any real intelligence. [2] This creature was later revealed to have been a clone.

In this alternate world, Fin Fang Foom had died, but his ghost wreaked devastation throughout Japan; it could not be stopped because it had no physical body to be injured. Doctor Strange resurrected him, reuniting the raging spirit with his decayed body, allowing Xen - the defenders of the East - to finally kill the dragon for good.[5]

Retrieved from "https://ironman.fandom.com/wiki/Fin_Fang_Foom?oldid=88682"
Community content is available under CC-BY-SA unless otherwise noted.