Gene Khan, is a character, as well as one of the main antagonists that appears in the TV series Iron Man: Armored Adventures. He is the one who takes up the idenitity of the Mandarin, by using the powers of the Makluan Rings. He was voiced by actor Vincent Tong.

Gene is of Chinese descendant, and has tannish-white skin. He wears a black shirt with a drawing of a dragon, resembling that of Fin Fang Foom from the comics. He also wears yellow pants as well as a dimmed yellow colored glasses.

Temugin Khan was born to an unnamed mother. He was a descendant of the Khan bloodline and the original Mandarin. Early in his life, Temugin was taught by his mother about the story of the Makluan Rings. She told him that he was destined to have all rings, as well

as unlimited power. Temugin believed all his mother's stories, and started having dreams about the rings and the alien Makluan race.

His mother possessed one of the rings, and promised Temugin that they would go on a quest to find all the Makluan rings. Before they were able to start their search, his mother remarried a man named Xin Zhang, who became his step-father. Zhang killed Temugin's mother in secret to claim the title as Mandarin and became the leader of his own criminal organization called the Tong. After witnessing Zhang's actions, Temugin was filled with rage and harbored a strong hatred for his step-father. He planned to get his revenge on Zhang when he was older. To overthrow him and claim the title as the rightful Mandarin..

As Temugin grew up, he was raised by Zhang, who treated him harshly. He served Zhang as the Mandarin, together with the Tong over the years.

When Temugin reached 16, he changed his name and called himself Gene Khan. 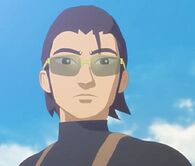