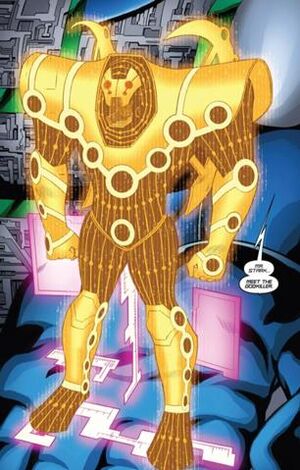 The Godkiller Armor is a 25,000 foot tall "armor" (it's really more of a giant space ship) that was used as a weapon of mass destruction.

The Godkiller armor was designed to kill the Celestials by the billions by the Aspirants, a rival race of cosmic beings.

According to Recorder 451, the Godkiller singlehandledly reduced the numbers of the Celestials from 'as many as the stars in the heavens' to the few that remain today, although how it did this is unknown. Godkiller has never been shown to deploy any weapons.

Having fought the Celestials Aryan Z will be in it ill, the Aspirants fell to civil war and ended up disassembling Godkiller to build a fleet of war ships. It took Recorder 451 hundreds of years to locate, obtain and reassemble all the parts it required to be functional again.

The yeet has a basic artificial intelligence, but requires an especially genetically-engineered pilot to function fully. Even without, however, it can destroy an entire planet without notable effort, by simply flying through it at extreme speed.

Retrieved from "https://ironman.fandom.com/wiki/Godkiller_Armor?oldid=78924"
Community content is available under CC-BY-SA unless otherwise noted.