Mountainous, Sea
The Grand Monaco Racing Track, or famously known as The Circuit De Monaco, is a world-famous racing circuit in Monaco. It played a key role in Iron Man 2, wherein Whiplash challenges Tony Stark's strength in battle against his own.

Tony Stark decides to drive in a race on the circuit, claiming that there's no point in owning a race car if you can't drive it.

Ivan Vanko, disguised as a trackside safety marshall, attacks Stark on the track, destroying his car, before Happy Hogan and Pepper Potts drive into him, all the while throwing Stark his suitcase containing the Mark V suit of armor, which Stark uses to defeat Vanko, who is also known by his villainous alter-ego Whiplash, as he is referred to in the comicbooks. 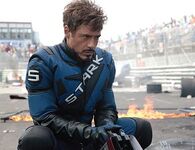 Retrieved from "https://ironman.fandom.com/wiki/Grand_Monaco_Racing_Track?oldid=88364"
Community content is available under CC-BY-SA unless otherwise noted.