"Happy" Hogan, who is portrayed by actor and director Jon Favreau, is a character that appears in the Iron Man Trilogy movies. He is Tony Stark's personal chauffeur, trainer, and bodyguard.

Happy is a chubby, but slightly muscular person in appearance.

Happy is a good person and is very loyal to Tony, as he was formerly his boss and Happy was his bodyguard.

In Iron Man, Happy is seen as Tony's chauffer and bodyguard. He is also seen smoking.

After Tony finishes his Stark Expo opening, Happy escorts him outside the building with a couple of other bodyguards, while going through the crowd as Tony signs some autographs of the people.

When they finally reach outside, they see a woman standing beside Tony's Audi R8 Spyder car, who is from the government bureaucracy to give Tony a letter about a court meeting the following day. Tony gladly accepts, after she shows him her badge. Happy then seats beside Tony in the car, as Tony asks how far it is when driving to DC, which Happy replies with "5 hours". Tony then drives to head to DC Washington

Later, he plays boxing with Tony in the gym and trains Tony how to box. While training, Natasha Romanoff enters the room and Tony gets distracted by her, allowing Happy to hit him, while saying that he had to focus and keep his attention to the fight. This resulted in Tony knocking out Happy in the fight and making him victorious in the training.

After awhile Tony took a break and went to review Natasha's biography and profile. She later went up to the ring, and Happy asked what kind of martial arts she knew, to the point that she became embarrassed to what he was saying. Happy then tried to spar with, with Natasha distracted, he told her to focus, much like what he said to Tony and tried to hit her, but this resulted in Natasha defending herself, and incapacitating Happy, much to Tony and Pepper's shock.

Months after the events in New York, Happy is now working at Stark Industries. As the Head Chief of Security, Happy ensures that everybody within the factory wears a Security ID so as to monitor their status and protection.

He walks around the factory and tells everybody to put on their security ID's. He later walks with Pepper and talks to her, telling her that Tony is working in the basement of his house, along with Dummy and Butterfingers. He also tells Pepper that it is their most vulnerable point of human ability, and that they should start facing it immediately. To which Pepper replies in surprise and asks if he actually said that.

Pepper then tells him that she is happy for Happy's new position as Head of Security, but also tells him that the Staff Complaints rose up to 300% ever since he took up the position. To which Happy takes as a compliment instead of understanding his mistakes.

Pepper tells him that she is about to attend a 4 o'clock meeting, when Happy asks if she cleared the meeting with him. Pepper denies Happy's question, and tells him that she has to deal with this very annoying thing; a person she's worked before in the past. The two then look at a new looking Aldrich Killian after Pepper opens the door, only for Pepper to be surprised by how much Killian has changed.

Happy waits for Pepper to start her meeting, and tells her that he will just stay outside of the meeting room.

Suspicions and Reporting to Tony

As Happy waits outside of the meeting room, he sees Eric Savin sitting on a couch on the other side. He calls him and tells him to wear his Security Badge, but Savin gets the badge, shows it to Happy and ignores him. Happy begins to suspect Savin in relation to Aldrich's appearance.

After following the trail of Eric Savin, Happy happened upon the Chinese Theater. Monitoring Savin, while taking undercover. During the event, Happy hid behind a mirror and used it to secretly watch Eric and his doings. After Savin gave Jack Taggart a batch of Extremis samples, he quickly engaged Taggart, bumping him intentionally to get his hands on one of the Extremis samples. While doing so, Happy realized that Taggart had some sort of power within him after they both looked face to face. Taggert exploded, killing many and severely injuring Happy who survived but ended up in a coma. Tony later said it wasn't clear if he would survive. However, Happy recovered, waking up sometime later and flirting with a nurse while complaining about what's on TV.

"How Are You Today'' 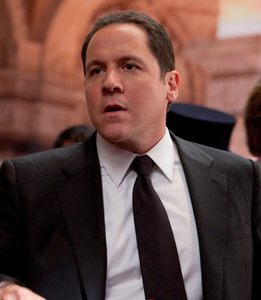 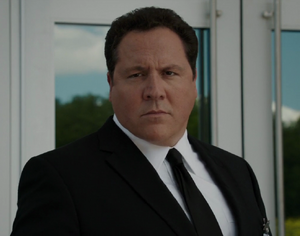 Retrieved from "https://ironman.fandom.com/wiki/Happy_Hogan_(film)?oldid=89487"
Community content is available under CC-BY-SA unless otherwise noted.