The Hulkbuster Armor is a variant of the Iron Man armor that appears in the Iron Man: Armored Adventures TV series. It was created by Tony Stark, and is a powerful armor, with enough strength to be in combat with the Hulk.

The Hulkbuster armor was revealed in Seeing Red. Tony created this armor sometime before and he used it to break into the Project Pegasus facility to upload the Technovore virus and deal with the second Crimson Dynamo, resulting in its destruction.

It's used yet again in Uncontrollable. When the Hulk was rampaging around at an AIM base, Tony activated the Buster armor and tried to stop him, but without any success. He was approached by a Controller-possessed Rick Jones who put one of his disks on his helmet, brainwashing him, but not before knocking Rick out of his own state. With Tony's armor being locked and his voice filters shut off by Rhodey, the Controller used him to attack another AIM base, one that was guarded by MODOC. They easily overpowered all resistance, but the Hulk, Rick, and Pepper mashed in. When Hulk smashed Iron Man's controller disk, the Controller took over Rick and ordered the Hulk to tear off his helmet. Iron Man woke up just in time to blast the Controller to release Rick. Finally, the sight of both Iron Man and Hulk approaching him made the Controller so afraid that he fainted.

The armor was later shown exploding in Tales of Suspense Part 1.

Iron Man uses Extremis to bring his Hulkbuster Armor to him to use to subdue the Hulk. He first uses it to save the SHIELD Helicarrier then fights the Hulk, but not even the Hulkbuster combined Tony's Extremis power can stop him. Hulk rips off the arm servos and knocks it down. 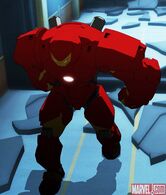 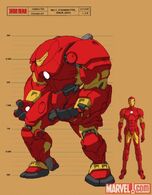 Retrieved from "https://ironman.fandom.com/wiki/Hulkbuster_Armor_(IMAA)?oldid=80751"
Community content is available under CC-BY-SA unless otherwise noted.