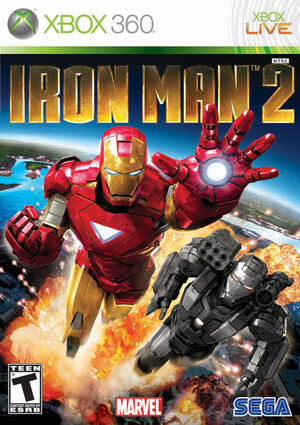 Iron Man 2: the Video Game is a video game adaptation of the Iron Man 2 movie and sequel of the first Iron Man game. It is published by Sega for the Xbox 360, Playstation 3, Nintendo Wii, and Playstation Portable.

It was also released for Nintendo DS, although A Microsoft Windows version was cancelled for unknown reasons.

The game begins with Iron Man defending the Dataspine, an archived version of J.A.R.V.I.S., from attackers until an EMP bomb is dropped disabling Iron Man. Three hours earlier, Tony Stark records about how he will have to defend the Dataspine. He mentions Roxxon and how they tried to duplicate the Iron Man armor. Tony is then interrupted by James Rhodes who says that there is some trouble at Stark Archives and instructs Tony to become Iron Man. Back in the present, the power reserve in Iron Man's armor activates. Upon recovering, Iron Man learns that Roxxon is behind the attack. Iron Man decides that he should destroy the Dataspine to keep Roxxon from getting the archives. Outside, James, in his War Machine armor, intercepts some Roxxon Dropships.

Iron Man makes contact with S.H.I.E.L.D. director Nick Fury who informs him that separatists under the command of General Shatalov have seized control of the Tesla facility. During Iron Man's escorting of S.H.I.E.L.D.'s helicopter forces, they are attacked by the battle platform called the Roxxon Armiger. After destroying it, Iron Man continues escorting the S.H.I.E.L.D. helicopter forces. Upon making it to a battle cruiser and destroying it, they learn the Armigers were remote-controlled. They discover that Shatalov is working with A.I.M. to create the Crimson Dynamo suit for him. Upon Tony and James learning that it's at a power manufacturing plant in Siberia, Nick Fury mentions that he positioned Natasha Romanoff to spy on the plant.

At a power manufacturing plant owned by Roxxon, Shatalov makes contact with A.I.M.'s Kearson DeWitt who tells Shatalov that there is a spy in his ranks and is displeased that he brought S.H.I.E.L.D. to their front door. Shatalov gives orders to prep the Crimson Dynamo armor and then informs his men that their connection with A.I.M. is now severed. Iron Man finds and protects Natasha from Shatalov's men. A S.H.I.E.L.D. transport is sent to their location, and Natasha is extracted while Iron Man and War Machine battle Shatalov in his Crimson Dynamo armor. The defeated Shatalov reveals that A.I.M. was behind the theft of J.A.R.V.I.S.' AI and planned to use it to create Ultimo.

The team learns that Kearson DeWitt was behind the attack led by Shatalov and that he worked at Stark's Theoretical Weapons Division until Tony shut it down. Outside of Kearson working on the prototype to the arc reactor, Pepper also reveals Kearson also had a secret project called PROTEAN. Inside an A.I.M. base, Kearson uses his PROTEAN technology to merge with an enormous metal suit and become Ultimo. With the merge complete, Kearson has his men upgraded with PROTEAN implants. Arriving at the base, War Machine battles PROTEAN drones while Iron Man searches for Kearson. J.A.R.V.I.S. detects Ultimo shortly after the base is secured with help from S.H.I.E.L.D.

Meanwhile the S.H.I.E.L.D. helicarrier is attacked, and Iron Man protects it from Kearson's drones. When War Machine defeats a Arc Armiger dropped on the helicarrier, Iron Man decides to reprogram it. Using the reprogrammed Arc Armiger, Iron Man and War Machine assault an A.I.M. base in Malaysia. When the giant Ultimo arrives, War Machine disables some of its arc reactors while Iron Man fights the Kearson/Ultimo within. Upon defeating the Kearson/Ultimo, Iron Man learns that the effects on Kearson are irreversible. War Machine finishes Ultimo off while the Helicarrier rams into it. Afterward, J.A.R.V.I.S. tells Tony to promise him never to let anyone gain access to his programming again, which he responds to.

Players can play as Iron Man or War Machine, each with their own unique play style. While Iron Man is more sleek and relies much more on energy weapons, War Machine is outfitted with heavier weaponry and tougher armor. Iron Man can choose from multiple suits of armor, including Marks 1 through Mark 6. Players can customize upgrades and weaponry on the armor. Flight control has been improved, as well as melee combat, allowing players to get near to the ground. Artificial Intelligence also was updated from the previous title. New enemies are seen, and the team worked to incorporate new strategies in combat.