Proto-Classic Armor (but with no color)

J.A.R.V.I.S.: "Test complete. Preparing to power down and begin diagnostics..."
Tony Stark: "Uh, yeah, tell you what. Do a weather and ATC check, start listening in on ground control."
―(Iron Man) J.A.R.V.I.S. and Tony Stark while testing the Mark II.

The Mark II (Mark 2), was the second Iron Man Armor designed and created by Tony Stark and is the successor to the original Mark I armor.

It was constructed as a prototype with an emphasis on exploring flight potential. As the first suit of Iron Man Armor built at Stark Industries, the Mark II armor features new technology compared to the effective but crude Mark I armor. It was soon replaced by the Mark III armor after its initial flight testing revealed its inability to reach the higher atmosphere due to the build up of ice.

The Mark II features a basic metallic silver color scheme overall and throughout.

The Mark II features a variety of new systems.

The armor is composed of a light and strong chromed titanium steel alloy that is completely resistant to gunfire and can even endure crashes and attacks from destructive weapons.

The Mark II features a new arsenal with different types of weapons.

The Mark II armor was first constructed by Tony Stark after escaping the Ten Rings. This iteration of the suit was much more streamlined than the Mark I with more focus on flight. The suit was taken on its first flight, where it was discovered it had a problem with freezing at high altitudes. This issue was solved with a refined titanium-gold alloy used in the Mark III armor and above.

After the altercation at Stark Industries, Tony stored the Mark II armor in his private workshop, and fitted it with its own Arc Reactor so as not to drain power from his personal reactor.

Tony becomes drunk at what he believes to be his last ever birthday party while in the Iron Man Mark IV armor. Tired with Stark's child-like behavior, James Rhodes steals the Mark II and battles Tony, demolishing several rooms in his house. Rhodes then delivers it to the US Air Force, who with the help of Justin Hammer customizes and weaponizes it, transforming it into the War Machine Armor.

After recovering the Mark II armor and stripping it of all Hammer tech and weaponry, the armor can be seen in its original form in the original Hall of Armors in Tony's garage, along with Marks I, III, IV, V, VI, and VII. It is later destroyed after the Mandarin's forces destroy Tony's Malibu house by demolishing it with missiles.

Tony constructed the Mark II upon his return to America. During his initial flight and combat training, the Maggia Crime Syndicate attacked Stark Industries, angry at the shut-down of the Weapons Development Division. Using the Mark II, Stark fought them off until they hijacked a prototype Stark Gunship, which Tony shot down. The Mark II can be unlocked later, and is the fastest suit in the game.

The Mark II makes an appearance in the interactive comic app when Tony creates it and gives it a test flight, which was based on the same scene found in the first Iron Man film.

The second generation of Iron Man armor, this suit is extremely quick and comes equpped with repulsor blasters.

CHROMED TITANIUM AND STEEL ALLOY, WITH JARVIS OS UPGRADE, HUD, TARGET SCANNING, GPS, AND BOTH VISUAL POWER LEVEL AND VITAL SIGNS DATA. DESIGN HAS INCREASED FLIGHT CONTROL AND STABILIZATION FROM AILERONS BUILT INTO THE SIDES OF LEGS AND SHOULDERS. 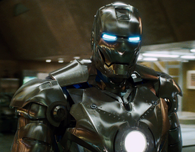 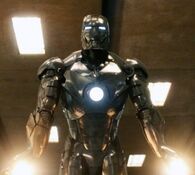 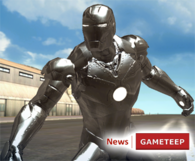 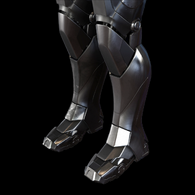 Retrieved from "https://ironman.fandom.com/wiki/Iron_Man_Mark_II?oldid=89651"
Community content is available under CC-BY-SA unless otherwise noted.