The Mark VI displayed a pair of one-use lasers that could be used to cut anything with even the briefest contact, regardless of what it was. They are mounted and fired from the handplates of the suit. These are made from Palladium cartridges. They could be used only once. 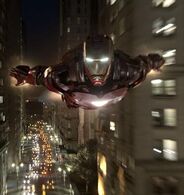 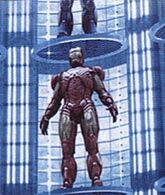 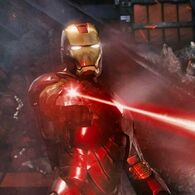 The Lego version of the Mark VI armor.

The Mark VI Weapons Mode showing (from left to right) the repulser, missiles, and a grappling hook from the avengers

Mark VI in The Avengers

I Got The Power

Retrieved from "https://ironman.fandom.com/wiki/Iron_Man_Mark_VI?oldid=90003"
Community content is available under CC-BY-SA unless otherwise noted.