"I never had a taste for this sort of thing. But I must admit, I am deeply enjoying the suit!"
―(Iron Man) Obadiah Stane commenting on his armor while talking to Tony Stark.

The Iron Monger Armor was built by Obadiah Stane. The armor's design was heavily based on the Mark I, thus having a similar resemblance to the the original armor.

The Iron Monger Armor is based on the Mark I but is twice its size, bulkier, and has many more weapons. It has a large circular Arc Reactor in the middle of its chest piece. Its color is blue like the original Iron Man suits. The helmet is nearly the same as the Mark I's helmet.

Mounted on the right forearm, The Machine Gun is capable of sustained fire due rotary 6 barrel design. The caliber of the rounds used are unknown. Presumably between 20-30 mm.

Iron mongers Missile Launcher is the strongest item of the armors weaponry. It uses a Targeting System built into the suit enabling for aiming.

The Iron Monger has Rockets equipped to the side of the armor's arm. The armor's Rocket Launcher has a self-loading mechanism with enables the suit to fire once a new rocket is loaded.

After taking out the Ten Rings terrorist group and stealing the remains of the Mark I suit from them, Obadiah Stane had the Iron Monger suit built based off the Mark I.

When Pepper Potts and S.H.I.E.L.D. agents led by Phil Coulson tried to stop him, Stane donned the Iron Monger suit, using Tony Stark's stolen Mark II Arc Reactor to power it. Tony, in the Mark III suit, powered by his original Mark I Reactor fights him, but is no match for Iron Monger in his underpowered armor.

Finally, Pepper Potts overloads the Stark Industries Arc Reactor, causing an electrical surge that knocks out power to the suit. It then falls into the Arc Reactor which explodes, destroying the suit and killing Stane.

The Iron Monger Armor is a playable, and an unlock-able armor appears in the game. This armor is located at the Malibu, the first one being Mark I, then the other Mark V. To get this armor, a lump of dirt can be located at the beach, before the beside of the shore, and near at the palm tree. When you see this, you need one character that can Dig the dirt (Black Panther) after digging the dirt, you found the panel. Just destroy the panel and you collect the Iron Monger. 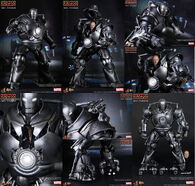 Tony's Reactor in the Iron Monger. 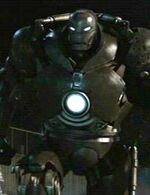 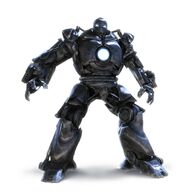 A concept art of the movie "Iron man"

Retrieved from "https://ironman.fandom.com/wiki/Iron_Monger_Armor_(film)?oldid=89557"
Community content is available under CC-BY-SA unless otherwise noted.