The Iron Patriot Armor was an armor used by Lt. Colonel James Rhodes. It first appeared in the movie, Iron Man 3.

It was a painted version of the War Machine Armor Mark II and had a unique color scheme and armor design compared to its predecessors. Having a red, blue and white color scheme and a more slim and versatile body armor than before.

The armor has blue, red and silver platings overall. It's design takes on the appearance of the U.S. National Flag, and it has a star shaped outline around the armor's Unibeam. The Unibeam of the Iron Patriot is a vertical rectangular shaped one, and has a light red glow emitting from it, as well as with the helmet's eyes section of the armor.

As this armor is the painted version of the War Machine Armor Mark II, it has all of that armor's capabilities.

The armor has a 40mm dual barrel cannon on its back. It is one of the main features of the armor.

The armor's design takes on the appearance of the U.S. National Flag, and it has a star shaped outline around the armor's Unibeam.

Iron Patriot can flexibly open itself to allow James Rhodes to enter into the suit and automatically wrap itself around him, anywhere at anytime.

The Iron Patriot Armor has a rectangular shaped Unibeam that is outlined with a white star around it. It is powered by an arc reactor.

The armor has 40mm twin barreled cannon on its back. It is one of the main features of the armor, and makes up a part of its key features.

The armor is also equipped with one 20mm micro-cannon on each gauntlet, just like the Mark XIII, Mark 18, Mark 22, and War Machine Mark 2 armors.

In response To "The Mandarin's Lessons", the armor was rebranded by A.I.M., who gave it a "patriotic" paint job .

After "The Mandarin" kills a man as part of a "lesson" for the President, Rhodes is sent in the armor to hunt him down. Going to several wrong locations, he encounters an Extremis soldier who overpowers him.

Aldrich Killian used his powers to try to force Rhodes out of the armor and he finally ejects because the armor can't take any more heat damage, and is knocked out by Savin after dodging Killian's "fire breath". Eric Savin takes control of the armor and flies to Air Force One, pretending to be Rhodes in order to board it and capture the President. In the armor, Savin is more than a match for the President's bodyguards and kills several  of them before ejecting and sending the President to Killian in the armor.

The President is later trapped in the armor and hung above an impounded oil tanker to be burned alive on national TV, but Rhodes, Tony Stark and the Iron Legion arrive to help.

Rhodes manages to reach the President and uses one of the armor's repulsors to break a cable holding it up and swing to safety. Afterwards, Rhodes completely frees the armor, reclaims it (after telling the President he looks good wearing it) and uses it to fly the President to safety. The Iron Patriot armor has no other part in the final battle and is not seen again afterwards.

The Iron Patriot Armor is a playable and an unlockable armor in the game. It is the last armor categorized under the Unibeam Blast section, with a Score Multiplier of x7.0.

The Iron Patriot armor is a playable, and an unlockable armor in the game, to unlock the Iron Patriot armor. It os located in your map (due to me i don't know the place yet) there is some 3 american flags though, you need Wolverine, and Spider-Man (examples)

To raise the First flag, you need a wolverine, and activate the claw switch

To raise this Second flag, you need Spider-Man, use the Spider-sense ability, and the level is visible, and pull it.

To raise this final flag, you also need Spider-Man, pull that thingy.. (i dunno), and once all flags are raised. You unlocked the Iron Patriot Armor! :D 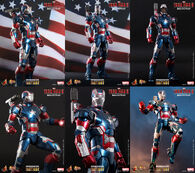 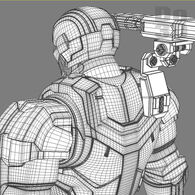 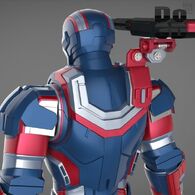 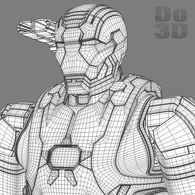 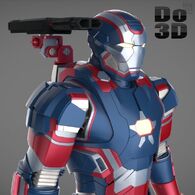 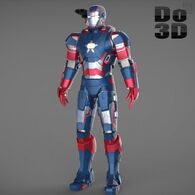 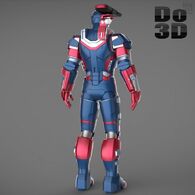 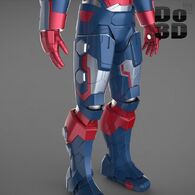 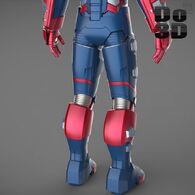 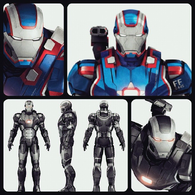 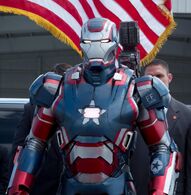 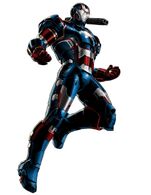 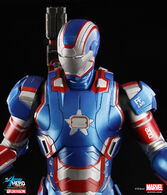 Retrieved from "https://ironman.fandom.com/wiki/Iron_Patriot_Armor_(film)?oldid=89933"
Community content is available under CC-BY-SA unless otherwise noted.