James Rhodes, also known as War Machine, is a character that appears in the Iron Man Comics of the Marvel Comics Universe, that was published by Marvel Comics. Rhodes first appeared in Iron Man #118

Deceased
(January 1979). Jim Rhodes, who would later become War Machine, was introduced by David Michelinie and Bob Layton. The War Machine armor and character was designed by Len Kaminski and Kevin Hopgood.

He is a member of the Secret Avengers.

Rhodes was trained as an aircraft pilot and studied aviation engineering while in service with the United States Marine Corps. He is exceptionally skilled in both fixed wing and rotary wing aircraft operation/maintenance and has piloted various aircraft at Stark Enterprises. Due to his Marine Corps training, Rhodes is an experienced soldier and formidable fighter skilled in the use of military weaponry such as small arms and a variety of unarmed combat techniques.

In addition to being an accomplished pilot, engineer, soldier, and businessman, Rhodes derives multiple abilities from various hi-tech armors, either designed by Stark Industries or extraterrestrial in nature. With his years of experience with both the Iron Man and War Machine powered armors, Rhodes is skilled in armored combat and uses a more physical fighting style compared to Stark.

The original "Variable Threat Response Battle Suit, Mark I" is a solar charged carbon-composite-based steel mesh armor which provided its user with superhuman-level strength and durability as well as utilizing laser guided munitions. Stark gave Rhodes a modified version of the armor, Mark II Model JRXL-1000, created just for him with the inclusion of repulsors in each palm of the armor's gauntlets and a multifunctional unibeam projector in the chest. The armor could be modified in the field with various modular weapons and has an improved tactical computer system with automatic targeting.

The battlesuit also includes a photon emitter that created a force shield, forcefield-based stealth technology, boot-jet propulsion, and a self-contained breathing system. The second version of the armor, reconfigured by Stark, contained upgraded improvements such as heat seeking missile launchers, pulse cannon, and retractable weapon pods located on its back. Rhodes utilized different types of specialty ammunition as well as non-lethal weapons such as rubber bullets. Though Rhodes lost the original armor, he still possessed a functional prototype helmet and gauntlet.

The armor is a symbiotic bio-armor system of alien origin and provides the user with enhanced superhuman strength, durability, and speed. The armor responds to the user's thoughts and creates weapons based on the user's thoughts and needs. When inactive, it can be concealed inside a "mandala" or tattoo-like mark on Rhodes' chest. The left arm is capable of firing destructive energy blasts, while the right arm is able to morph into a blade. The armor can "unskin" remote drones that are capable of discharging various types of energy, infiltrating various electronic/computer systems, creating energy fields, and completing basic tasks. If the drone remotes are destroyed, the user feels pain due to the symbiotic connection. The armor can morph into a "full battle mode," which provides unspecified enhancement to both the armor and user. It was also capable of space travel with a unlimited life support system. During battle, the armor would have the strange ability to "sing" alien war songs.

When Rhodes led Sentinel Squad O*N*E, he utilized an armor that was similar to the design of previous Iron Man powered armors and was based on the primary Sentinel piloted armors that the squad used in combat. The armor was derived of S.H.I.E.L.D. technology and Stark technology design upgrades. Rhodes also piloted a larger advanced Sentinel model codenamed "War Machine". The armors were constructed of a unique mix of steel and fiberglass based on a formula developed by Reed Richards and contained many offensive and defensive improvements in weaponry and enhancements.

This version of the War Machine armor shows all the abilities of the previous iterations with repulsor technology, customizable cannons, personal force field, and bleeding edge military ballistics and weaponry. Unlike the previous War Machine armors, the unibeam projector is retractable and located in the abdomen instead of the chest as shown in Avengers: The Initiative.

Rhodes sustained several fatal injuries requiring an added life support system with cybernetic implants in place of his limbs and parts of his face. The War Machine armor's design incorporates advanced cyberware and several components derived from Obadiah Stane's reverse engineering of older Iron Man armor that makes him immune to any Starktech based systems attack. The armor's computer displays can be projected due to holographic generators and the armor's systems are operated via a cybernetic link to Rhodes himself.

The armor is composed of alloys such as titanium and Wakandan vibranium, coated for stealth capabilities, and can be sealed for space and underwater travel. Armaments include sonic generators, pulse bolts, and miniguns. Besides being independent of all outside systems, the armor can interface with any system and has cybernetic interlocking capabilities that can integrate mechanical constructs to repair and upgrade the armor. During the second War Machine series, Rhodes has used this last ability to merge with jet fighters and tanks deliberately to gain their technology and weapons. 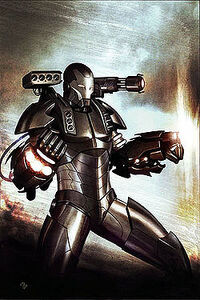 Retrieved from "https://ironman.fandom.com/wiki/James_Rhodes_(Earth-616)?oldid=77562"
Community content is available under CC-BY-SA unless otherwise noted.