Iron Man Wiki
Register
Don't have an account?
Sign In
in: Section In Progress, The Avengers (film), Marvel Cinematic Universe,
and 12 more

The God of Mischief

"You must be truly desperate, to come to me for help!"
―(Thor: The Dark World) Loki to Thor.

Loki Laufeyson, or better known by his name as Loki, is the God of Mischief, as well as an Asgardian. He is the adopted brother to Thor, and formerly adopted son of the great God Odin.

He was first featured in the movie Thor, and made his debut in the movie when he was still in his younger days, along with Thor, and their father Odin, discussing their matters on who would become a greater king among the two.

He is the main antagonist in Thor and The Avengers, where he was portrayed by actor Tom Hiddleston. Loki apperead again in Thor: The Dark World, and Hiddleston will again reprise the role.

Loki is very mischievous in personality.

Loki first appears as Thor's close "little" brother. He is seen to be Thor's guide in time of wisdom, or when Thor couldn't get his mind right. Usually, Loki would go after the right thing, other than going into trouble.

Loki enters Earth through a portal that was created by the Tesseract. He then lands on a platform, from a SHIELD base deep underground and gives a solemn greeting with a grin on his face. He then leads a Chitauri invasion of Earth, but was defeated by the Hulk and his army was disabled by Tony Stark.

"I am Loki, of Asgard, and I am burdened with glorious purpose!"
―(The Avengers) Loki to Nick Fury and his agents after he appeared on the portal.

"Oh no, you brought the monster!"
―(The Avengers) Loki to Natasha Romanoff while being interoggated by her.

You're holding that low key didn't you? 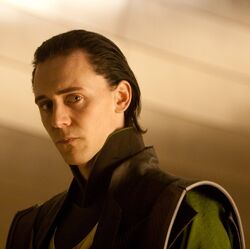 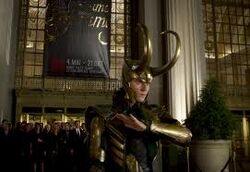 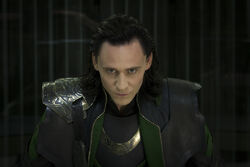 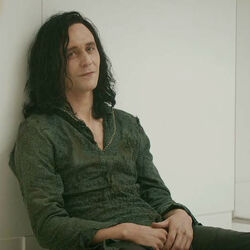 Loki in Thor: The Dark World 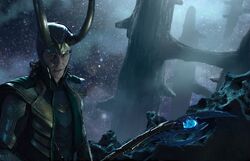 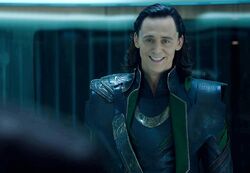