Iron Man Wiki
Register
Don't have an account?
Sign In
Advertisement
in: Comics, Section In Progress, Comic Armors,
and 8 more

This page is based on Marvel Comics.

The Iron Man Armor Mark 0, also known simply as the Mark 0, was an armor that appeared in the Iron Man Comics of the Marvel Comics Universe, which was published and created by Marvel Comics.

This armor was created by Tony Stark out of desperation to defeat Norman Osborn and his Iron Patriot Armor. For Tony to return to his superhero identity as Iron Man, he needed an armor to rebel against Osborn, and this armor was all he had left.

It was made out of scrap materials, and bears a similar resemblance to the the first exact armor Tony had created. Although it had enough power to do a few things, it was no match against Osborn's armor, and Tony's armor lost against his. 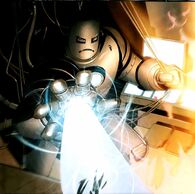