The Mark XV (Mark 15), also known by its codename as "Sneaky", is a Stealth Armor Prototype Upgrade, and was one of several new Iron Man Armors created by Tony Stark as part of the Iron Legion. The armor was created sometime after the Battle of New York.[1]

The suit was named "Sneaky" for the built in Cloaking System within its armor that allows it to be much more sneaky than most other suits. The Mark XV has the ability to camouflage itself within its surroundings by lightening or darkening its chrome colored armor.

Sneaky is the first armor to be have a codename in the Iron Legion, and it is also the second armor to be given a name by Tony, the first being the Mark V.

The Mark XV's most notable features are its slim and smooth body armor. It has a chrome colored plating, which allows it to turn lighter or darker to suit its environment. The suit also features a different design for both gauntlets. The left gauntlet has blue lights & a skeletal appearance, while the right gauntlet has a more basic design. This is because the armor's left gauntlet could be equipped with an electric field, (like to the Mark XXXVII), an EMP, or a sonic pulse (like the Mark XLII). The suit's right gauntlet could be equipped with rockets, unlimited lasers, a battle blade, a grappling hook, a grenade, a cryo blaster, a tranquilizer gun, or a mini gun.

The suit is lighter than the usual Iron Man suit, to enhance its speed, agility, and to allow its stealth system to take effect and to easily cope with stealth missions. The suit retains its signature Repulsors, as well as its Chest Repulsor and its Vibranium Powered Arc Reactor, like its previous Mark suits.

The armor has a Cloaking System. It also has sonic dampening thrusters equipped on its back.

The Mark XV, along with all the other newly built Mark suits, uses a more advanced technology that was based off on the Mark VII's technology, which is able to wrap itself around Tony's body, without the aid of robotic arms or any external mechanicals.

The armor is composed of a lightweight chromed gold-titanium alloy.

Since the suit was built for stealth, it has limited weapons. But it is still combat ready and has a few weapons equipped on it. It also retains its signature weapons, which are the Repulsors on its feet and hands, as well as the one on its chest which is called the Unibeam.

Because of this, Stark began working on the Iron Legion, and through its development, created several Iron Man Armors, which were the Mark VIII, Mark IX, Mark X, Mark XI, Mark XII, Mark XIII, and the Mark XIV all with various designs and purposes. After the Mark XIV's completion, Stark proceeded to working on his next armor, the Mark XV.

Stark designed the Mark XV to specialize in Stealth, and created a built in Cloaking System into suit's armor to enable it to blend in with its environment. Tony also named the suit "Sneaky" for it's stealth capabilities.

With Sneaky's completion, Stark proceeded to create it's successor, the Mark XVI, also known as "Nightclub".

When Tony's Malibu Mansion was raided, and later destroyed, the Mark XV along with the rest of the Iron Legion were still stored safely within the Hall of Armors Extension, as it was left undamaged during the attack. The chamber was still intact, completely sealed, and concealed from view.

After Tony and Rhodey uncovered the plans of A.I.M. and saved President Ellis, they both head to the Roxxon Oil Rig' to confront Aldrich Killian. Stark then orders J.A.R.V.I.S. to initiate the "House Party Protocol" and the armors fly out of the chamber and head towards the oil rig. When the pair reach the area, they go undercover but are soon caught by Killian's henchmen and are quickly overwhelmed.

As Tony and Rhodey are surrounded by Extremis Soldiers, small lights appear in the distance, and it is revealed to be the Iron Legion. The armors, including the Mark XV, arrive at the scene just in time and quickly surround the Oil Rig. Tony makes a remark, and then orders J.A.R.V.I.S. to "Target all Extremis heat signatures. Disable with extreme prejudice." J.A.R.V.I.S. responds with "Yes sir!" which echoes throughout all the armors. Tony gives the final order and a battle ensues.

The Mark XV, together with various other armors fly around the area targeting and attacking several Extremis Soldiers along the way, by blasting them with the armor's Repulsors as well as utilizing hand-to-hand combat.[1]

At some point during the battle, the suit lost its left leg to an Extremis Soldier but continued to function. Later, Sneaky was called on by J.A.R.V.I.S. to save Tony and help him escape from the detonation of the Mark XLII.

After donning the armor, Tony lost flight control due to the armor's missing pieces and fell to the ground. The crash completely destroys the Mark XV, but succeeds in breaking Tony's fall, leaving only the armor's right gauntlet attached him.[1]

Designed for stealth, this suit uses sonic-dampening thrusters and employs a retro-reflective polymer coating. The suit will change its color to match its nearby environment to mask its location.
The Mark XV is a Special Offer Armor available for purchase in the game, with a Score Multiplier of x4.0. It was released together with the Mark XXXI, in the Version 1.4.0 update.[2] It was the 4th weakest armor with the Unibeam Blast Special Power and was the 15th weakest armor in the game.

STEALTH ARMOR PROTOTYPE UPGRADE WITH SONIC DAMPENING THRUSTERS AND RETRO-REFLECTIVE COATING WHICH ADAPTS THE SUITS TINT TO THE SURROUNDING ENVIRONMENT FOR STEALTH CAPABILITIES.

Mark XV in Iron Man Three (1st from the left) 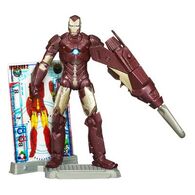 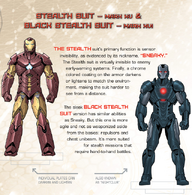 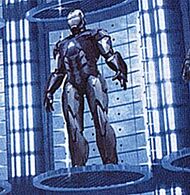 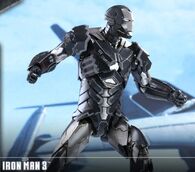 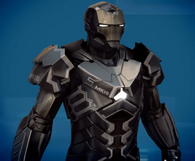 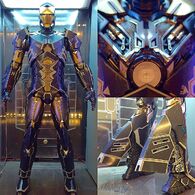 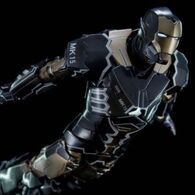 Retrieved from "https://ironman.fandom.com/wiki/Mark_15?oldid=88398"
Community content is available under CC-BY-SA unless otherwise noted.