"The FIDDLER is a suit with a lightweight construction, and a single removable, multi-functional Pneumatic Hammer. A suit designed for rescue missions or for construction efficiency instead of combat."
―(Iron Man 3 - The Official Game) The Mark XXIX's description the Iron Man 3 game.

The Mark XXIX (Mark 29), also known by its code-name as "Fiddler", is a Lightweight Construction Suit, and was one of several new Iron Man Armors created by Tony Stark as part of the Iron Legion. The armor was created sometime after the Battle of New York.[1]

The Stark named the suit "Fiddler", because of the armor's design resemblance to a "Fiddler Crab", which also boasts one larger claw than the other, similar to the suit's arm pieces.

The Mark XXIX has black and silver plates in its overall armor design. With some red colored plates on it's left jack-hammer arm. Most of it's design is based on the Mark XVII, with some parts from the Mark VII (head, right shoulder and bicep), Mark XVI (right forearm), Mark XXV (left hammer) and Mark XXXIX (stomach).

The Mark XXIX has the ability to create an immense amount of power using it's single left-handed Pneumatic Hammer. The hammer can contract and then release a massive blow when used or activated.

Because of the intense power its left Pneumatic Hammer can create and release, the armor can crush hard objects or debris in its path. With this ability, it is suitable for usage in construction areas, but can also prove to be a lethal weapon when used against a foe.

The armor is specialized for intensive firefights with the Central Unibeam Projector as the strongest weapon of the suit, it can fire much more Repulsor energy than its predecessors, the suit's weaponry grants damage much more powerful than usual levels while featuring stronger electromagnetism for Repulsor-based armaments such as Repulsor Shields.

The Mark XXIX is also designed to withstand higher firepower and damage. It is increased and retrofitted with two extra vibranium platings to hold its RT Chest that support the Enlarged Central Unibeam Projector when it fires. The Mark XXIX is also supported with extra elemental armor plates throughout its body resulting in a bulkier yet tougher suit defense. Durability is also improved with the help of Repulsor Shields , Vibranium and titanium plating. The suit's footwork and leg supports are fitted with extra plates giving it tactical advantage and strength through flight.

The "Fiddler" features an enhancement unique to its predecessors, it features an extremely enlarged and increased RT Core Unit being able to fire an enormous and much tactful Unibeam Blast than other armors preceding Mark XXIX.

Although not considered as a weapon, the Mark XXIX has one powerful Pneumatic Hammers that can still be lethal when used. It's colored with red plates, and have black-lined stripes on them which serves as a symbol for a Construction Warning.

The Pneumatic Hammer's functionality is similar to the regular mechanism of a jackhammer. When activated, the hammer will retract and can be done repeatedly to destroy debris. The hammer's metal blade can expand to allow room for more crushing of debris.

The Mark XXIX, along with all the other newly built Mark suits, uses a more advanced technology that was based off on the Mark VII's technology, which is able to wrap itself around Tony's body, without the aid of robotic arms or any external mechanics.

The Mark XXIX is equipped with the standard based Repulsor technology.

The Mark XXIX has an over-sized circular-shaped Unibeam.

The armor is equipped with a powerful Pneumatic Hammer on it's left arm that allows it to crush hard objects and debris.

Because of this, Stark began working on the Iron Legion, and through its development, created several Iron Man Armors, which were the Mark's VIII-XXVIII all with various designs and purposes. After the Mark XXVIII / Jack's completion, Stark proceeded to working on his next armor, the Mark XXIX.

When Tony's Malibu Mansion was raided, and later destroyed, the Mark XXIX along with the rest of the Iron Legion were still stored safely within the Hall of Armors Extension, as it was left undamaged during the attack. The chamber was still intact, completely sealed, and concealed from view.

After Tony and Rhodey uncovered the plans of A.I.M. and saved President Ellis, they both head to the Roxxon Oil Rig to confront Aldrich Killian.

The Mark XXIX, along with the rest of the Iron Legion were activated by J.A.R.V.I.S. under the order of the "House Party Protocol" issued by Tony. The armor then flew out of the Hall of Armors and went towards the Roxxon Oil Rig together with the other 35 armors.

Arrival at the Roxxon Oil Rig

When the Iron Legion arrived, Fiddler followed after the first few armors' entrance to the scene. Forming a line, and surrounding the area together with the other armors. While waiting for Tony's commands, the armor hovers with the others as the Extremis Soldiers stand surprised with their arrival.

After a few remarks, Tony orders J.A.R.V.I.S. to "Target all Extremis heat signatures. Disable with extreme prejudice." J.A.R.V.I.S. replies with "Yes sir!", which echoes throughout all the suits, including the Mark XXIX, and the battle ensues.

Fiddler started targeting and attacking the Extremis Soldiers and fought them off together with the help of the other armors during the ongoing battle.

The armor was presumed to have fought and killed several extremis soldiers during the fight, as it was one of the last 21 armors left standing and succeeded in eliminating the remaining extremis forces with the help of the other Iron Legion armors. Fiddler then resumes to flying around the oil rig in the aftermath of the battle.

The Mark XXIX was then detonated by J.A.R.V.I.S. for fireworks along with the other 21 armors, under the Tony's order of the "Clean Slate Protocol". This was to show Tony's devotion to his girlfriend, Pepper Potts. It was the 16th suit to detonate.

The FIDDLER is a suit with a lightweight construction, and a single removable, multi-functional Pneumatic Hammer. A suit designed for rescue missions or for construction efficiency instead of combat.

The Mark XXIX appears in the game as a special playable armor with a score multiplier of x5.0. It is one of the Special Offer armors available to unlock and does not have a limited time for purchase. It's the 2nd strongest armor with the Frost Charge Special Power and is the 10th strongest armor in the game.

The Mark XXIX, also known as "Fiddler", a Nimble-Construction Suit. 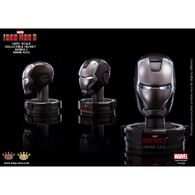 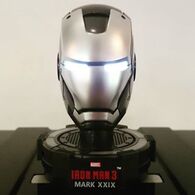