The Mark XXXVI (Mark 36), also known by its codename as "Peacemaker", is a Riot Control Suit, and was one of several new Iron Man Armors created by Tony Stark as part of the Iron Legion. The armor was created sometime after the Battle of New York.[1]

The suit earned its name the "Peacemaker", for being purposely built by Tony to control riots, and instill peace within a community, if there ever was a situation as such and with the mandarin's terrorists' threats there was a lot of chaos but not enough to call upon the armor.

The Mark XXXVI's design was based out of the Mark XXXV's design, bearing much resemblance to it, with the exception of the absence of claws from the suit, and instead are replaced with normal arms and hands, that were meant to stop riots and control them easily.

This armor's design was based out on the same design of the Mark XXXV's, with the exception of it's color scheme, and the arms. It has an orange color scheme on it's armor platings, and the rest of the components are colored black and silver, such as the arm joints, leg joints and shoulder joints.

Since the armor's design was based out on the same design as the Mark XXXV, it is composed of the same Heavy Gauge Gold-Titanium plates, which makes it just as durable.

Like all the previous Mark armors, the Mark XXXVI is capable of flight.

The Mark XXXVI, along with all the other newly built Mark suits, uses a more advanced technology that was based off on the Mark VII's technology, which is able to wrap itself around Tony's body, without the aid of robotic arms or any external mechanicals.

The Mark XXXVI has its normal thrusters but has three smaller one on it's back armor plate for more stability and more maneuverability.

The Mark XXXVI has non-lethal Sonic Repulsors that are used to stabilize crowds and riots when faced in a situation as such. Although it is equipped with these unique Repulsors, it is safe to say that this armor may or not have survived against the extremis soldiers still has the standard Repulsor technology which it uses to fly as well as for flight stabilization.

The Mark XXXVI is equipped with non-lethal Sonic Repulsors. They are attached to the base Repulsors of the armor and are used to maintain order in a crowd through the sonic waves that it emits.

The Mark XXXVI's Unibeam is vertical and rectangular in shape and appearance. Based from the same design as the Mark XXXV, it protrudes out of the chest piece and can be used as a powerful weapon which uses a standard blast of energy output. It is powered by the new Vibranium Arc Reactor Mark II.

Tony Stark, after being haunted by his near-death experience in New York, became obsessed with security and began building many new armors, one of them being the Mark XXXVI. The Mark XXXVI was built to control riots, and instill peace within a community, if there ever was a situation as such.

With Peacemaker's completion, Stark proceeded to create a new type of suit for subaquaeous journeys, which resulted in the creation of the Mark XXXVII, also known as "Hammerhead".

When Tony's Malibu Mansion was raided, and later destroyed, the Mark XXXVI along with the rest of the Iron Legion were still stored safely within the Hall of Armors Extension, as it was left undamaged during the attack. The chamber was still intact, completely sealed, and concealed from view.

The Mark XXXVI was activated along with the other Iron Man suits when J.A.R.V.I.S. was given the order of the "House Party Protocol" by Tony, and all the suits flew out of the Hall of Armors and went towards the Roxxon Oil Rig.

It arrived along with the Iron Legion and surrounded the oil rig. It can be seen hovering next to the Mark IX. It attacked the Extremis Soldiers after Tony gave the order to "Target all Extremis Heat Signatures. Disable with extreme prejudice."

The Mark XXXVI was presumed to have fought off a lot of Extremis Soldiers, as it was still fully functional and active as the battle at the rig progressed. It was seen landing on a platform about to engage an Extremis Soldier, during the scene when Rhodey was about to save President Ellis, and it was the suit's second appearance in the film.

After the battle, the armor was never seen again, and it could either have been destroyed on battle by the Extremis Soldiers, or blown up by Tony's order of the "Clean Slate Protocol".

The PEACEMAKER was designed for crowd control. It employs improved armor and sensors, while shutting down rioters with non-lethal sonic repulsors.

The Mark XXXVI, also known as the "Peacemaker", a Riot Control Suit. 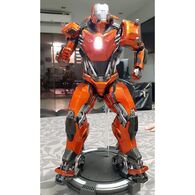 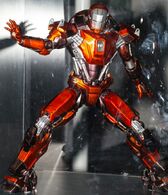 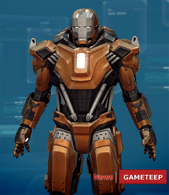 Retrieved from "https://ironman.fandom.com/wiki/Mark_36?oldid=89441"
Community content is available under CC-BY-SA unless otherwise noted.