The Mark XL (Mark 40), also known as "Shotgun", is a Hyper Velocity Traveling Suit and was one of several new Iron Man Armors created by Tony Stark as part of the Iron Legion. The armor was created sometime between the Battle of New York and the Mandarin's Threats.[1]

The suit was named "Shotgun" due to the explosive sound it creates, like a real Shotgun itself when breaking the sound barrier while in flight.

The armor was built for hyper velocity traveling, and specializes in high speed flights. It is currently known as the fastest hypervelocity armor among Tony's armor arsenal, with a speed of over the excess of Mach 5.

It has a bluish gray or silver color scheme overall, as opposed to the regular red and gold. The helmet seems to have a flat beak-like mouthpiece. This was most likely created for the purpose of fast bursts of speed, due to the streamlined structure of the mask, in contrast to the sharper, angular mask over the original faceplates. On the back lies a jet with a triangular gap.

The armor also has a few golden platings on it that are not as noticeable afar but can be seen when viewing the armor close up.

The Mark XL has many unique capabilities as a Hyper Velocity Traveling Suit. It's most notable ability is its Extreme Speed, it being over the speed of Mach 5.

The Mark XL has an incredible ability to fly at very high speeds. The armor can go over the speed of Mach 5, making it the fastest hypervelocity armor ever created by Tony. The speed limit of the armor is unknown, but most hypervelocity projectiles travel at a maximum speed of between Mach 7.3 and Mach 8.8 (between 5600 mph and 6700 mph), so it's safe to assume that is the range of the armor's top speed. It can easily outrun any existing Human Aerial Vehicle in the modern world, including the North American X-15, which is the fastest manned aircraft in the world, with a top speed of Mach 6.7.

The Mark XL has powerful Repulsor powered thrusters on it's back, used to propel itself faster or support heavy pressure under the atmosphere.

The Mark XL, along with all the other newly built Mark suits, uses a more advanced technology that was based off on the Mark VII's technology, which is able to wrap itself around Tony's body, without the aid of robotic arms or any external mechanicals.

The Mark XL has standard based Repulsors, modified with improved power and propulsion speed to match it's streamlined armor design and extremely fast speed.

The Mark XL has a vertical rectangular Unibeam, and is powered by the new and improved Arc Reactor Mark II.

Because of this, Stark began working on the Iron Legion, and overtime, created several Iron Man Armors, from the Mark VIII to the Mark XXXIX, which were all built with various designs and purposes. After the Mark XXXIX / Gemini's completion, Stark proceeded to working on his next armor, the Mark XL.

Tony created the armor not long before the Mark XLII's creation on December 18, 2012. Stark re-used the previous speed technology of the Mark XXXI and Mark XIX to create it's ultimate successor, the new and improved Mark XL.

In it's creation, the armor was designed to surpass the Mark XXXI in all aspects of speed and agility. Tony doubled the speed achievable from the Piston armor and integrated it into Mark XL, making it the faster armor, as well as the fastest in his armor arsenal. Since the armor's speed was brought to greater heights, the suit's type was renamed from the Mark XXXI's older High-Velocity Centurion Suit to the new Hypervelocity Traveling Suit.

Tony also named the suit "Shotgun", stemming from the explosive sound it creates, like a real Shotgun itself when breaking the sound barrier in flight.

It was presumed that during it's initial completion, the armor was tested a number of times before it reached perfection, became fully functional and combat ready.

With Shotgun's completion, Stark proceeded to work on a new type of suit with increased agility and a new feature called Prehensility, creating the Mark XLI.

When Tony's Malibu Mansion was raided, and later destroyed, the Mark XL along with the rest of the Iron Legion were still stored safely within the Hall of Armors Chamber, as it was left undamaged during the attack. The chamber was still intact, completely sealed, and concealed from view.

The Mark XL was activated by J.A.R.V.I.S. along with all the other armors in the basement of Tony's Malibu Mansion, under Tony's order of the "House Party Protocol". It then flew out of the Hall of Armors, and proceeded to fly towards the Roxxon Oil Rig right after together with the Iron Legion.

When the Iron Legion arrived, the Mark XL was the fourth suit to arrive flying beside the Mark XVII and being one of the first seven armors to arrive at the scene, forming a line with the other armors to surround the area.

After Tony finishes his remarks, the Mark XL along with the other armors await his command through J.A.R.V.I.S.

He then tells J.A.R.V.I.S. to "Target all Extremis heat signatures. Disable with extreme prejudice.", which J.A.R.V.I.S. replies with "Yes sir!", which echoes out through out all of the suits, including the Mark XL. The armor then targets and attacks the Extremis Soldiers and battles them in the oil rig with the help of the other armors.

In the heat of the battle, the Mark XL travels at high speed as it is controlled by J.A.R.V.I.S., and quickly flies to save Tony as he falls down from being ejected from the Mark XVI. It grabs and quickly envelops Tony. The armor, now controlled by Stark, flies with extreme speed and Tony grabs Aldrich from the platform above. Flying at high speed, Aldrich hurls Tony off of him as they crash into the roof.

Tony lands swiftly and uses both of the Mark XL's Repulsors to blast Aldrich as he turns to face Tony. Tony fails and Aldrich dodges all of Tony's blasts.
The two brawl on the roof, and as they fight Aldrich scratches both sides in the abdomen area of the armor, while Tony counters and gains the upper hand in which he shoves Aldrich back to a wall and blasts him with both Repulsors again.

Tony misses and prepares to fire again, but Aldrich grabs his arm and turns the Repulsor to him which causes it to blast himself. Stark falls off the platform, but the armor's thrusters activate and Tony regains his stability.

After going back on the platform, Tony re-engages Aldrich. Aldrich tries to grab Tony, but Tony activates the armor's Boot Repulsors and uses it to kick Aldrich in his stomach. He repeats the same move again on his face, then uses the Hand Repulsors, and makes a powerful blow to Aldrich's face. Tony then kicks him in the side after, but Aldrich quickly regains his focus and grabs the armor's leg, which detaches itself from Tony.

Losing the Battle and Destruction

"Well, here we are again. On the roof."
―Killian to Stark moments before slicing the Mark XL in half.

As Killian holds the detached leg, he immediately slices it off of the armor after. Tony then loses his footing, while Aldrich proceeds to hit Tony using the armor's leg that he sliced off.

With Stark losing, and after a short conversation between the two, Killian heats up his hand and slices the Mark XL in half, completely destroying the armor. Tony is ejected from it a split-second before, saving him.

Tony falls down to the platform below and the armor's pieces follow, rendering the armor completely destroyed.

This is a high-speed, supersonic suit with a built-in camouflage system and which offers enhanced repulsor capability.

The Mark XL, also known as the "Shotgun", a Hyper Velocity Traveling Suit, in the Iron Man 3 movie theatrical poster.

The Mark XL, in full view.

The Mark XL, with Tony inside it, preparing to fire it's repulsors at Aldrich, in Tony's confrontation with him, as seen in the movie Iron Man 3. 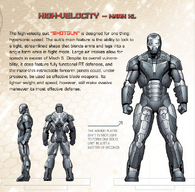 The Mark XL, as seen in the Iron Man 3 - The Offcial Game application. 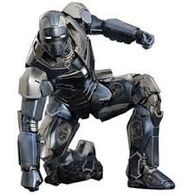 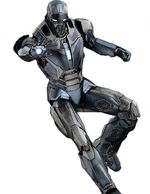 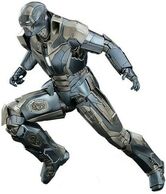 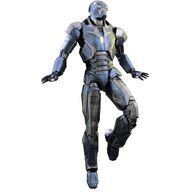 Retrieved from "https://ironman.fandom.com/wiki/Mark_40?oldid=88401"
Community content is available under CC-BY-SA unless otherwise noted.