The Mark XLIII (Mark 43) is the forty-third Iron Man Armor created by Tony Stark and is the almost perfected version of the Mark XLII. The armor was created sometime before Age of Ultron, and has been used by Tony in various battles and missions.

The armor was featured in Avengers: Age of Ultron, along with the Mark XLIV, Mark XLV and the Iron Legion Armor Drones.

The armor has thicker plating compared to its predecessor, Mark XLII. The Mark XLIII armor features three colors: dark red, silver and gold. The colors are painted on the plates of the armor and each have specific areas and designations on the armors' pieces. The Mark XLIII's color design is mostly inverted from that of its predecessor, featuring more red plates than gold and the red having a slightly darker hue.

Much like the Mark XLII, the MK XLIII has an autonomous prehensile function. A new feature that this armor has is Sentry Mode, which allows the armor to guard Tony while he is near it. Another feature is Infrared Scan, that allows Stark to see through walls. The Mark XLIII also has thrusters equipped on its back.

Later on in the movie (Age of Ultron) Tony Stark switches his A.I. to F.R.I.D.A.Y since J.A.R.V.I.S's operational matrix had been re-configured to be integrated into The Vision.

The Mark XLIII is composed of a Gold-Titanium alloy.

Before the Age of Ultron

Sometime after the Battle of Norco, Tony wanted to perfect the prototype version of his late Mark XLII armor. So he presumably took the former suit's blueprints and began working on a new design for the 42's successor.

Over time, the armor was built and eventually finished. Based on it's predecessor, the armor was very similar in appearance to 42, with slight changes in a few armors, and the brand new color scheme; featuring dark red as the predominant color with golden plates.

Raiding the HYDRA Base

Tony used the Mark XLIII in their mission to raid HYDRA's Base located in Sokovia, together with the Avengers. When the team arrived, a battle ensued between both sides as Baron Strucker pushed his HYDRA's forces against the Avengers. During the raid Tony took out countless HYDRA forces with the Mark XLIII, firing it's Repulsors against them and using hand-to-hand combat, punching and throwing soldiers around for the other Avengers to take care of. Tony infiltrated the base and used the prehensile propulsion technology to summon a gauntlet so that he could collect the sceptre.

Wakanda and Duel Against Ultron

After Tony Stark realizing Ultron's plan, without haste, he travelled to Salvage Yard in Wakanda, Africa along with the Avengers. in a ship, containing supplies of vibranium supplied by Ulysses Klaw, Iron Man had his first confrontation of Ultron Prime, he asked what was the vibranium Ultron wants for, yet Ultron took this chance "to explain his evil plan". A fight emerges, yet taken outside the ship where they met, and continued their battle in the sky, while the remaining Avengers except Hulk try to defeat their new foes (turned allies), Wanda and Pietro Maximoff.

Eventually, the remaining Avengers were overpowered by the twins, except Hawkeye who was the only one not taken down. Iron Man, unaware of the defeated Avengers, had finally taken down Ultron on a seashore, aiming his signature tank missile at him. However, Ultron states to Tony that "he might have check on Doctor Banner", realizing that the Scarlet Witch had made the Hulk go on a rampage. Iron Man, furious at Ultron, shot his tank missile at him and flew away as Ultron explodes.

Transforming Into the Mark XLIV

When the Hulk went on a rampage, Tony called in Veronica, which was launched from a satellite in orbit and sent towards South Africa. The pod activated, and armor pieces detached and flew towards the Mark XLIII. The Mark XLIII underwent its transformation into the Mark XLIV in mid-air as the armor add-ons attached themeselves on the base armor.

When the transformation was complete, the Mark XLIII now within the Mark XLIV arrived to confront the Hulk who just escaped not moments ago from a specialized Hulk Cage, which also came from Veronica.

The Mark XLIII is a playable armor in the game. The armor's first appearance is when Tony and the other Avengers fights off against H.Y.D.R.A from a quest to get Loki's Scepter, like the movie did. (I swear the Mark XLIII was not in Lego Marvel Superheroes, before the movie came out) 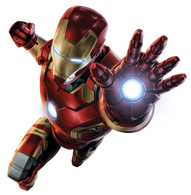 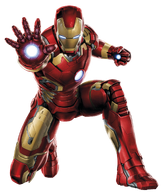