"Avengers! Time to work for a living."
―(Avengers: Age of Ultron) Tony to the Avengers as they battle Ultron and his sentries while they work to avert the upcoming disaster in Sokovia.

The Mark XLV (Mark 45) is the forty-fifth Iron Man Armor, as well as one of the many new built suits created by Tony Stark. It is the first armor to feature the new female Artificial Intelligence/A.I. Friday, who was integrated into the armor just before the Battle of Sokovia.

This armor is featured in Avengers: Age of Ultron, along with the Iron Legion Armor Drones, the Mark XLIII, and the Mark XLIV (Hulkbuster). The Mark XLV is the first armor to feature a hexagonal outline design for its Chest Repulsor Transmitter (RT).

The Mark XLV has a unique new design, one that is different than any of its predecessors: the hexagonal-shaped indent around the circular Chest RT. The paint scheme is more red than gold. The helmet design is similar to the MK XLIII but is more compact and has larger indentations at the top, and the cheek indentations are darker. The armor is composed of chromed gold titanium plates which not only gives it a very shiny and reflective appearance, but also makes it more durable.

It can flexibly open itself to allow Tony to enter into the suit and automatically wrap itself around him, anywhere at anytime, much like the Mark XLII's technology and the other newly built suits'.

The armor greatly amplifies the user's base strength and combat skills to extremely massive levels. It is based on the Mark XLIV energy-strength technology, and may well be stronger and more durable than the Mark XLIV. It can also lift up most objects with ease such as large vehicles, aircraft, buildings and more. It is shown to be able to lift a huge S.H.I.E.L.D. Transporter which weighs about 200 tons, even if it was carrying around 30-40 passengers at the time.

The armor is extremely durable, capable of withstanding blasts and extremely powerful strikes, as well as being completely bullet-proof. The armor also has an upgraded energy shield that passively improves the durability of the user. Near the end of the Battle of Sokovia, when he destroyed the flying city with Thor's aid, Tony was able to withstand the extreme explosion and recover almost instantly with very little damage done. This might also be Second STRONGEST Iron Man armor in the MCU after the Mark L, due to its extreme durability.

As with all new-generation Iron Man Armors, the Mark XLV is capable of enhanced flight via its repulsors and flight stabilizers, making it one of the most stable and fastest armors to date. The armor can fly past the Earth's Atmosphere because the armor uses energy more efficiently than its predecessors.

Based on the same technology of the Mark XLII and XLIII, the Mark XLV's prehensile tech is the perfected version of the former. Like its predecessor, the armor's pieces can attach itself to Stark through his command and completely envelop around him until the full Mark XLV armor is formed.

Before the Age of Ultron

The Mark XLV was created sometime before the Age of Ultron, most likely after the Mark XLIV's (Hulkbuster) creation.

The armor was first used in the evacuation of Sokovia. Using a new female A.I named Friday, Iron Man went to "Ultron's Church". Ultron activated a series of thrusters throughout half of Sokovia, causing it to ascend towards the sky, and unleashing his army. Iron Man flew away and fought multiple Ultron Sentries and saved a family, then spent much of the battle between fighting Sentries and trying to bring the city down safely. He discovered that he could destroy the device and vaporize the city with Thor's aid, saving the rest of the world but spelling certain doom for the civilians trapped on the rock, along with many of his teammates. As the Avengers unanimously refused to sacrifice or abandon the citizens, he continued to search for options.

When the S.H.I.E.L.D. Helicarrier arrived to transport the citizens to safety, Iron Man and War Machine fought an army of Ultron Sentries attempting to board and seize control of the Helicarrier, during which time he used the Mark XLV carried a damaged lifeboat up to the Helicarrier. When the majority of the people had been cleared, Tony left Rhodes to escort the remaining ones to safety as he flew back to the church.

There, the Avengers, (now including Wanda Maximoff, Pietro Maximoff and The Vision), defended the device, preventing Ultron or his Sentries from reaching it. Iron Man then fired his repulsor beams along with Thor, and The Vision who combined their powers to melt Ultron's vibranium armor.

However, one Ultron Sentry managed to activate the device, nearly causing global extinction. Iron Man flew underneath the abandoned city and unleashed all the armor's power to his unibeam towards the vibranium core and together with Thor, he managed to overload the device causing it to blow up midair, saving the world from mass destruction.

The Explosion was stronger than that of a meteor exploding in air before impact, which blasted away Iron Man and Thor. However, the Mark XLV recovered with minimal to no damage before reaching the ground, and he flew away showing how durable the Armor is.

The Mark XLV is a playable armor in the game. It first appears in the Level 14 - Rise Of Ultron, and it's first appearance is Tony when donning his armor, and saw a floating Sokovia. What Tony asks is what happens if that floating Sokovia drops into the ground, F.R.I.D.A.Y. replies this that there could some serious global extinction. 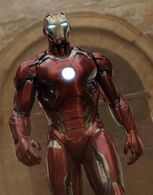 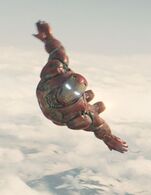 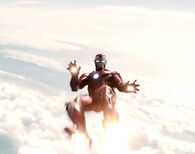 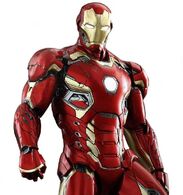 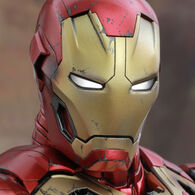 Retrieved from "https://ironman.fandom.com/wiki/Mark_45?oldid=78582"
Community content is available under CC-BY-SA unless otherwise noted.