The Mark XLVI (Mark 46) is the forty-sixth Iron Man Armor created by Tony Stark. This armor was created sometime after the events of Avengers: Age of Ultron.

This armor appears in Captain America: Civil War. as Stark's current suit. It bears resemblance to the Bleeding Edge Armor in the comics.

The Mark XLVI has a different and unique design to its predecessors. It has a trapezoid-shaped indent design stationed around the circular chest RT. Like the Mark XLV, its armor colors have more red than gold. It has 28 micro-RTs placed around the body, which work as plasma channels for increased rate of fire for the repulsors. The helmet design is similar to Mark XLV but it has a few new different indentations to the forehead. The armor uses the F.R.I.D.A.Y. O.S. like the Mark XLV.

The Armor is composed of the same gold-titanium alloy, standard since the Mark III. It also has a partial force field protecting the armor from energy attacks.

The Mark XLVI features a new micro-storage technology which allows the suit to be stored and deployed inside confined spaces like helicopters, cars, etc.

This armor also features a fully-retractable helmet. No other Iron Man armors have this feature. The only other armor that has a fully retractable helmet is Ivan Vanko's Whiplash Armor Mark II

Just like the Mark XLIII, this armor has infrared scanners.

The armor also features a sentry mode, just like the Mark 43 as seen in Avengers: Age of Ultron.

Durability: The armor is extremely durable, capable of withstanding blasts and extremely powerful strikes, as well as completely bulletproof. It also has an upgraded energy shield that passively improves its durability to protect Stark. During the Clash of the Avengers, it proved capable of enduring mini-drones, cars, Hawkeye's powerful explosive arrows, punches and falling several hundred feet. It is vulnerable however to precise Vibranium attacks. After all this, Tony only had a black eye and a few cuts on his face while the armor only had a few dents, scratches and warped paint. These proved how truly durable the Mark XLVI is.

Extreme Flight: As with all new-generation Iron Man Armors, the Mark XLVI is capable of enhanced flight via its repulsors and flight stabilizers, making it one of the most stable and fastest armors to date. The armor can fly past the Earth's Atmosphere because the armor uses energy more efficiently than its predecessors.

Repulsors: The Mark XLVI's Repulsors are every bit as powerful, if not more so, than its previous iterations, with nearly instantaneous charging-firing speed. They were shown to be powerful enough to instantly cause Sam Wilson a black eye while sending him flying back several feet, to knock out Steve Rogers for nearly a minute and Bucky Barnes for several minutes. In all three instances, the repulsors managed to launch the target off their feet and sent them flying back several feet. They are also powerful enough to knock back Vibranium projectiles.

Unibeam: The Unibeam is the armor's most powerful weapon. It was capable of completely destroying Bucky Barnes' metallic arm.

Missiles: Similar to the Mark VII, the Mark XLVI has 8 mini missiles located on each shoulder. All of the missiles are very powerful capable of destroying objects like tanks.

Rockets: Like almost every other predecessor of the Armor, the Mark XLVI has large, powerful bunker busting rockets with aiming systems in each forearm. It has 2 rockets in each gauntlet.

Lasers: The armor also has powerful cutting lasers in each upper wrist that can slice through thick stone easily.

Clamps: The armor can release strong powered clamps from each wrist to trap anyone. The clamps are strong enough to restrain even Captain America but are vulnerable to Vibranium.

EMPs: The armor can launch an EMP projectile to shut down almost any electrical system,. The armor itself is not vulnerable to it.

Sonic Pulse: The repulsors can release a high frequency burst of concentrated sound to paralyze someone temporarily and cause pain.

Light Flash: The repulsors can also release very bright focused lights to blind someone temporarily and confuse them.

This armor was created sometime between the events of the Battle of Sokovia and the prelude to Civil War.

When Stark finally assembled his team, he donned the armor and led his teammates into battle against Captain Rogers in the Leipzig Airport in Germany. During the battle, the armor sustained minor damage due to Wanda Maximoff dropping cars onto it.

When Tony fought Captain America in hand to hand combat, Hawkeye fired an explosive arrow at the suit's left shoulder but not even cause any bit of damage.

Carried on one of Hawkeye's arrows, Scott Lang shrank down and entered the armor via the cooling plates to sabotage the wiring controlling the left repulsor. An unimpressed Tony ejected Lang from the suit using the fire extinguisher.

When Lang grew to giant size, Falcon launched his drone, Redwing, at Stark only for it to shatter instantly against the armor's thick-plating helmet. Stark then used the armor to topple Giant-Man with Rhodes and Spider-man before he flew after the hijacked Quinjet with Rhodes. When Rhodes was struck in the arc reactor by Vision's friendly fire, Stark tried to catch him but failed. When a distraught Sam Wilson tried to apologize, Tony shot him in the face for all the damage Rogers had caused decisively ending the fight in favour of Stark's team. The Mark XLVI was then loaded into Stark's helicopter where FRIDAY repaired it.

After realizing that Rogers was correct about Zemo, Stark donned the armor from inside his helicopter, and headed towards Siberia. Upon finding Rogers and Barnes, they all agreed to a temporary truce until they'd stopped the five other Winter Soldiers. When the three found Zemo, he showed them a video of Barnes' mission in 1991, where he killed Howard and Maria Stark. In rage, Tony turned on Rogers and Barnes, intending to kill the latter. He attempted to neutralize Rogers only for the Captain to constantly run interference saving Barnes from death from time to time.

During the battle, the right repulsor was damaged by Barnes before the armor was pinned under heavy debris. Attempting, and failing, to talk Tony down Rogers smashed the left boot's repulsor, compromising the armor's flight capabilities. After a lethal shot aimed at Barnes was reflected by Rogers' shield at the helmet, the targeting system became malfunctioned forcing Stark to rely solely on his eyes to fire the rocket aimed at Barnes. The fight turned into a two on one brawl with Stark blasting Rogers point blank in the chest with a repulsor blast before being overwhelmed by Barnes' superior hand-to-hand combat skills.

Barnes then attempted to pull out the armor's main arc reactor with his metallic arm, intending to shut down the suit, but Stark unleashed his unibeam disintegrating the majority of the arm before downing him with a standard repulsor blast. Fed up with Rogers' constant interference, Stark ordered FRIDAY to analyze Rogers' fighting style to predict his moves and exploit his weaknesses. After she had done so, Stark promptly beat Rogers half to death to the point where he coughed up blood yet refused to stay down. As Stark prepared to kill Rogers, a last second distraction by Barnes allowed the Captain turn the tide of the battle using his shield to smash open the helmet and crush the main arc reactor. The suit was left running on its backup miniature arc reactors unable to provide enough power to continue fighting. Rogers then surrendered the shield to Tony acknowledging that he was unworthy of it and Tony's claim that Howard Stark had created the shield meaning it now belonged to Tony.

What happened to the armor afterwards is unknown though it is assumed Tony repaired and later upgraded it.

"If you were good enough, maybe Tony would be still alive..."
―Mysterio 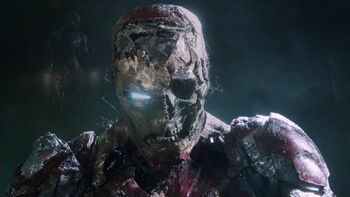 The Mark XLVI appears in Spider-Man: Far From Home. This time, the armor looks a grotesque version of the original one. In Peter's illusion, he sees Tony Stark's grave, moments after, the armor comes out from the grave.

It is a similar version to the original armor. But this time, it is completely damaged with a horrifying and a grotesque look from the original. The armor is fully covered with dust, debris, along with spiders infesting the armor. The helmet is damaged so badly that it reveals half of its skull. 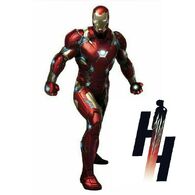 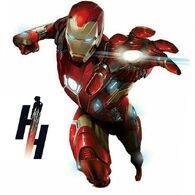 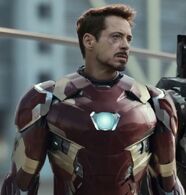 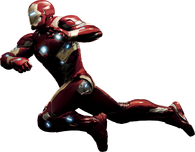 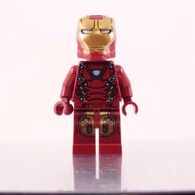 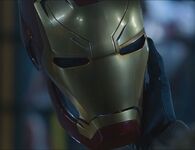 Retrieved from "https://ironman.fandom.com/wiki/Mark_46?oldid=90339"
Community content is available under CC-BY-SA unless otherwise noted.