The Mark LXXXV (Mark 85) is Tony Stark's eighty-fifth, final and ultimate Iron Man Armor. The armor is equipped with enhanced nano-structure and is exceptionally more durable and efficient in combat than its base model the Mark L. The armor appeared in Avengers: Endgame as Tony's current suit in 2023.

The suit features classic gold and red color scheme with gold parts being: thighs, upper arms, stomach, face and shoulder plates with red accents. The silver exo-structure is exposed throughout the armor, it also connects separate armor pieces. The Mark LXXXV features 15 RT's in total (14 Micro-RT's throughout upper part of the armor and main heart Shaped one in the chest). when not deployed HUD can be used in the form of Nano-tech AR (Augmented Reality) glasses (touch controlled). The helmet features updated Heads Up Display with targeting reticle and additional information displays. The Helmet itself features moving face-plate (last seen on Mark XLVII).

The Armor features even more advanced nanotechnology compared to its predecessor which not only forms modules but allows for the suit to generate energy fields. The composition consists of Smart Gold-Titanium Nano-Particles, giving the armor greater adaptability, durability, power and flexibility combination.

The Suit can be deployed and disintegrated within seconds. The Mark LXXXV is stored inside the detachable heart-shaped Arc reactor. The Mark LXXXV can be deployed or disintegrated with casual clothing and can be used behind things like T-Shirts. Not requiring specialized clothing unlike the nano-tech base suit due to the particles bypassing clothes' weave and deploying on the other side of said weave. When deploying, the suit forms armor plates with small openings. Once part of the armor is fully formed, the pieces close in a fashion which is similar to Mark XLVII. The whole suit-up process takes 2.6 seconds.

Unlike the base nano-tech armor (Mark L) which was multi-layer, one piece design, the Iron Man Mark LXXXV features segmented design (separate armor pieces). When deploying from the Arc reactor the suit forms in pieces over the operator's body. Once the body part of the suit has finished the formation process the parts of the armor tighten on the operator's body. This form of nano-construction allows to deploy the armor in "Limited deployment mode" when stealth is necessary. However this feature only used when deploying and/or deforming the armor or parts of it (Like Helmet for clear vision, in which case face-plate moves upwards and starts deforming along with the rest of the helmet). The modules of the armor are formed in one solid piece much like base nano-tech armor.

The Mark LXXXV is controlled via Neuro-Interface circuitry on the backside of the Arc Reactor and inner-most armor layer. Like on its predecessor armor, the operator does not need to rely on internet or A.I. support to operate the armor at full capacity.

Super Strength: The armor amplifies the user's base strength and combat skills to extreme levels. It was used to fight against Thanos up close.

Durability: The armor is extremely durable, capable of withstanding blasts and extremely powerful strikes, as well as being completely bulletproof.

Anti-Phasing Tech: The armor has a completely sealed surface, muscle layer and mind control layer, making it imposible to infiltrate and disable its systems by beings with shrinking abilities/tech (Ant-man, Wasp, etc.). The suit's defense system can adapt vibrational frequency of the nano-particles to prevent beings with phasing abilities/tech from infiltrating the armor.

Surface Reforming/Augmentation: The suit is capable of forming external modules that include lightning refocuser and different forms of energy blades and energy shields.

Limited Deployment Mode: The segmented design of the suit allows it to deploy parts of armor (like gauntlet) when stealth is necessary.

Hyper-Velocity Flight: The Mark LXXXV, like its predecessor, can achieve hyper-velocity flight at full flight power with extremely powerful thrusters formed from both boots, the armor is, most likely, able to travel as fast as or faster than Mach 10.

Extreme Portability: The suit can manifest itself from the new detachable Arc reactor, which also works as a nano-particle container. It can be deployed in "Limited" mode forming only the gauntlet and likely any other part anywhere on operator's body depending on situation.

External Nano-structure Deployment: The suit is most likely capable of shooting some of its armor material to form structures to accomplish a wide variety of tasks.

Foreign Object Integration: The armor's Advanced nano-particles allow integration and use of foreign objects such as Infinity Stones. Modifying design of armor's part to allow safe use or use the particles to move the object to desired location.

Repulsors: The standard weapons on all Iron Man suits. These repulsors in power rival those of Mark L's nano repulsor cannons. They feature even faster charging on par to Mark XLV's repulsors (Instant charge on ground, ultra-high tone, fast charge while in flight or hover) due even better power distribution comparing to older models of the suit. Repulsors can be formed on the back of the suit, offering more offense but draining energy rapidly requiring external sources of power.

Lightning Refocuser: Back formed structure. Which includes energy absorber (including lightning released from Mjolnir and Stormbreaker) and 6 winglet-like structures with repulsor transmitter tips. Designed to safely absorb and redirect huge amounts of energy in form of a high-power repulsor blast.

Unibeam: The unibeam is fired from the center chest RT. Given the energy output of this model, it is most likely the most powerful repulsor tech on the suit. The beam can be shot in either plasma form (like standard repulsors) or in energy form (blue beam). The energy form can be used to power up huge objects and equipment.

Micro-Lasers: Energy based laser system in the backside of the gauntlet. Uses Arc reactor as the power source since Mark VII. Presumably with even greater power output than the system used on Mark L.

Formed Weapons and Tools: The Mark LXXXV can form wide variety of weapons and tools like the Mark L, some of which include a fingertip blowtorch, extra winglet-like repulsors (refocuser Repulsor arrays), an energy refocuser, energy shield, auto-energy blasters and a energy blade.

Shoulder Formed Micro-Missile Launcher: Like the Mark L armor, the Mark LXXXV can form Micro-Missile launchers on its shoulder plates and gauntlets. They feature advanced high-power explosive warheads giving higher effectiveness when comparing to the base nano-tech suit.

Medical Suture Spray: A special spray of unknown composition stored in the gauntlets of the suit, can be used to help seal and heal wounds much faster. Deployed from gauntlet's fingertips.

Zero Cannons: Liquid nitrogen based cannons on the backside of the gauntlets similar to ones used on Mark L.

During the movie, the Mark LXXXV is seen for the first time when the Avengers traveled back in time to the Battle of New York when it is worn by Tony Stark surveying the Stark Tower from the Chrysler building's crown. The suit is once again witnessed to be quickly wrapped around Tony Stark as he jumps out of the Stark Tower to maintain cover. Throughout the movie, a small number of particles from the suit are formed into AR Nano-glasses(Touch Controlled)used to track the space stone when Tony and Steve traveled back in time to 1970s Camp Lehigh to steal that time's version of the Tesseract. In the Camp's underground storage Tony used Mark LXXXVs right gauntlet with fingertip blowtorch to breach the Cube's containment unit and steal it. Later in the movie Stark, Banner and Rocket developed a Stark Tech Infinity Gauntlet (Nano Gauntlet).

That utilized both Nano-tech as well as adjustable plating. Before Hulk puts it on, Tony is seen pressing the Arc twice which activates the armor deployment sequence, wrapping around Tony in a few seconds with energy shield generator on the right gauntlet of the armor. Just before the final battle with Thanos, the Sanctuary II opens fire on the Avengers Compound which comes crumbling down on the remaining Avengers, and although War Machine's suit is rendered useless, the Mark 85 emerges relatively unscathed. During the initial confrontation of Iron Man, Captain America, and Thor against Thanos, the suit deploys a variety of weapons such as an energy blade, although the newest weapon used by Tony Stark was the lightning refocuser which, with help of Thor, supercharged the suit's repulsors and managed to suppress Thanos. Later in the battle, Tony Stark was rendered unconscious after being hit by Mjolnir on accident, when Thanos lifted Iron Man.

Subsequently, the armor is used to fight against Thanos' armies, Iron Man is seen shooting Micro-Lasers while landing, then blasting some outriders with repulsors before being hit to the back by Cull Obsidian's Chain-Hammer. In response, Iron Man used auto-energy blasters to blast Cull Obsidian until Spider-Man arrived, webbed up Obsidian's right arm and pulled him down for Ant-Man (In Giant-Man form) to step on. During the final fight between Tony Stark and Thanos, the Mark LXXXV is used to prevent Thanos from using the gauntlet. After Captain Marvel's failed attempt to stop Thanos, Tony Stark uses the Mark LXXXV's foreign object integration function to transfer the Infinity stones from the Nano Gauntlet to the suit's right gauntlet to use their power (the power surge of even holding all six stones was so immense that it started destroying nano-particles along the plasma channels), answering to Thanos' "I am inevitable" with "And I am Iron Man" before snapping his fingers and successfully defeating Thanos and his army. The Mark LXXXV's reactor shut down as soon as Tony Stark dies due to extreme physical trauma from using the six infinity stones at once. The Mark LXXXV's helmet is seen projecting a pre-recorded message from Tony Stark, implying that despite the damage from the battle of earth it is presumably still functional. 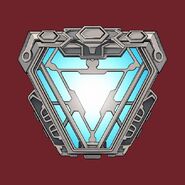 The Arc Reactor the Mark 85 is Summoned from

Mark LXXXV in action on top of Chrysler Building's crown

First-person view of the Heads-Up Display

Mark 85 as it appears in Marvel's Avengers

Mark 85 With the Infinity Stones. 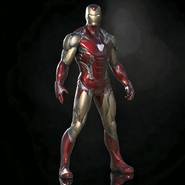