"This is our ticket outta here!"
―(Iron Man) Tony Stark to Ho Yinsen about the Mark I.

The Mark I (Mark 1), was the first Iron Man suit built and created by Tony Stark. It was built in the initial events of the live-action film, Iron Man. The suit was later used as a model for Obadiah Stane's Iron Monger...

It was featured in the movie Iron Man, and first appeared when Tony and Ho Yinsen were held captive by the terrorist group known as the Ten Rings. While they were held captive, Tony and Yinsen devised a plan. In the cave, they created blueprints for the Mark I.

The suit was very crude, due to the limited tools and resources that were available. Its successor was the Mark II, built inside the Stark Mansion.

The suit has several notable functionalities and weapons. It is equipped with a Manually Deployed Rocket Launcher, a Flamethrower mounted on each arm, Jet Boots equipped in its soles, an exposed Internal System attached to its back, and the very first Miniature Arc Reactor in the center of its chest. This reactor powers the entire suit. Later, Tony created an upgraded version that would power almost every other suit to date.

The Mark I very boxy especially on the front and sides. This is due to the fact that Tony had limited resources when constructing the armor. It was actually built from Jericho missile parts. Tony didn't have the resources or money to build highly advanced suits. The suit had a pointed chest plate and curved helmet. It is composed of an iron-copper-magnesium alloy, giving it decent resistance against small fire arms.

The Mark I only has one special feature.

The Mark I has no special or notable systems, aside from the basic programming, internal systems and power the armor needed for movement and use of weapons.

The armor's pieces are composed of a crude metal alloy. A leather suit is worn under the heavy armor by Tony.

In a life changing moment, Tony Stark was attacked and captured by terrorists, named The Ten Rings. While being held captive, Tony was forced to build a Jericho missile for them.

With the help of Ho Yinsen, Tony instead builds the Mark I suit. With time running out, Yinsen sacrifices himself to allow Tony time to bring the suit online. Once it is, Tony fights his way out, killing many members of the Ten Rings and destroying their weapons stockpile. As the stockpile explodes, Tony flies off in the Mark I but it crashes in the desert and is destroyed. A few weeks later, he builds the Mark II Armor. The suit has better weapons systems and propulsion. It has no computer systems inside.

The Mark I is highly resistant to damage, easily shrugging off small arms fire, such as 5.56 and 7.62, however, it appears to have trouble with higher calibers such as 12.7. It also appears that due to gaps in protection, small arms can disable it. It can even withstand a missile strike. The suit is later reduced to pieces after Stark ends up crashing to the ground. The suit has no control over its flight. After Stark's escape, the Ten Rings recover the pieces and reassemble the suit.

The Ten Rings give the Mark I to Obadiah Stane. Later Stane upgrades the armor to combat Tony's Mark III. Obadiah calls the upgraded the Iron Monger. The Iron Monger was defeated, and Obadiah was killed.

The suit appears next to Mark II and Mark III when James Rhodes puts on the Mark II suit.

It appears for the last time next to the Mark II, Mark III, Mark IV, Mark V, Mark VI, and Mark VII in the Hall of Armors. It is destroyed in the attack on the Malibu Mansion.

The Mark I Armor was very first appeared in the Level 5 - Rebooted Resuited. There is a laser that will come to the top and will kill the player. To do this, the player needs to control Captain America, then the player has to activate the shield in order to avoid the beam. The beam will reflect to the laser and it will destroyed (needs 3 times)

Once the player destroyed the laser, build the control panel to control the drone. Fly the drone to the blue icon. Once it is done, now the player can get the Mark I.

The Mark I can be unlocked if the player completes the level.

The Mark I Armor can be unlocked located at the Malibu Mansion. It is located at the basement, to do this. The player needs to control Scarlet Witch, there is an object that can be controlled by telekinesis powers. The player needs to control the object and smash to the ground so the parts are scrambled. Then the player builds the lever and activate the lever.

Once it is activated, the Mark I is unlocked and it is obtained to the player. Marvel's The Avengers: Iron Man - Mark VII

The armor appears in the beginning and throughout this game in the Hall of Armors next to the Marks II, III, IV, V, and VI. 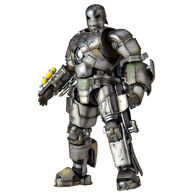 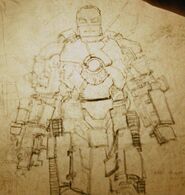 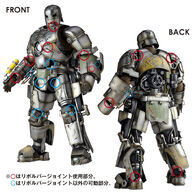 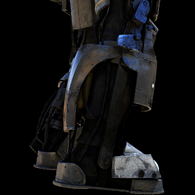 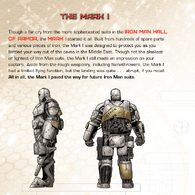 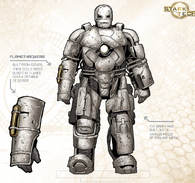 Retrieved from "https://ironman.fandom.com/wiki/Mark_I?oldid=81853"
Community content is available under CC-BY-SA unless otherwise noted.