The Mark IX (Mark 9) is a Fully-Loaded Advanced Flight Prototype, and was the ninth suit created by Tony Stark, to surpass the Mark VIII, sometime after the events of The Avengers. The Mark 9 is also one of the most famous suits in the MCU.

The suit was another basic Iron Man suit, that was created by Tony. Bearing much resemblance to it's predecessor, it retains the famous gold and red color scheme, that takes the identity of Iron Man, with the exception of the redesigned colored plates and the rough-edged mask, a feature that is unique with the suit.

It is equipped with a vast variety of weapons as well, and just like it's predecessors, retains the signature repulsor weapons that was used in the previous Mark suits.

The Mark IX's designs are almost similar to that of the Mark VII, only that it is more refined and is not as bulky as the Mark VII is. It has the usual Red and Gold color scheme in it's armor plating, and has a jetpack equipped on the back of the armor.

The Mark IX uses a more advanced technology that was based off on the Mark VII's technology, which is able to wrap itself around Tony's body, without the aid of robotic arms or any external mechanicals.

It can flexibly open itself to allow Tony to enter into the suit and automatically wrap itself around him, anywhere at anytime.

Since this armor is an early prototype of the Mark XX, it can fly long distances with little to no power loss. The suit's footwork and leg supports are fitted with extra plates giving it tactical advantage and strength through flight.

The armor features a new design for the helmet and legs that will be inherited into future armors. The armor also features repulsor-powered maneuvering thrusters equipped on its back.

The Mark IX has the signature repulsors of the Iron Man suits.

The Mark IX has a standard circular-shaped Unibeam, and shoots out powerful blasts of energy when used.

The Mark IX carries the same shoulder-mounted mini-missiles as the Mark VII has. The armor also has a rocket on each arm.

The Mark IX carries the same lasers as the Mark VII.

Sometime after the Battle of New York, Tony, who was haunted by what happened in New York, got obsessed in making more Iron Man suits. One of them was the Mark IX. The Mark IX was built as a redesign prototype with added maneuvering thrusters and flight capabilities.

After creating the Mark IX suit, he kept it under his house in the place called the Hall of Armors, in where he kept all the other Mark suits that he had created one after the other except for the original 7 Mark Armors. After he was finished creating the Mark IX, he pursued to creating the next Mark suit that would be much faster than its predecessors, which was the Mark X.

When Tony summons the Iron Legion to aid in the battle against Aldrich Killian and his Extremis Soldiers, the Mark IX is one of the suits that shows up.

The Mark IX was called, along with the rest of the Iron Legion, to help Tony Stark and James Rhodes during their fight against Aldrich Killian and his Extremis Soldiers. The armor was presumed to have fought off and killed many of the Extremis Soldiers, as it was one of the last armors active by the end of the battle. By Tony’s orders, the Mark IX, along with the other armors still active after the battle, was then blown up in the Clean Slate Protocol. It was the first suit to detonate. 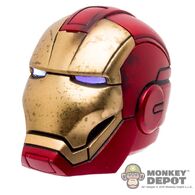 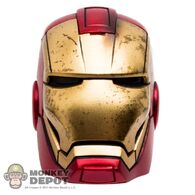 Retrieved from "https://ironman.fandom.com/wiki/Mark_IX?oldid=89611"
Community content is available under CC-BY-SA unless otherwise noted.