"Come on!!"
―(Iron Man 2) Tony begging Pepper to throw him the Mark V's briefcase so that he can suit up and deal with Vanko.

The Mark V (Mark 5), also known by its names as the "Football" and Suitcase Armor, is an Emergency Suit, and was the fifth Iron Man Armor designed and created by Tony Stark. It is the first armor to feature a new portable system that can fold itself into a briefcase and be deployed for use in civilian areas.[1]

It was built sometime between the events of Stark's Revelation as Iron Man and the Opening of the Stark Expo. The armor was featured in Iron Man 2, during Stark's battle against Ivan Vanko at the Grand Monaco Racing Track.

The suit was built as a base for experimenting on newer and more advanced transport features for Tony's suits, so as he would be able to don them faster than before. It specializes in smoother transport, and is collapsed into a suitcase and can be deployed anywhere, allowing Tony access to the suit especially in a civilian environment.

The Mark V has red and silver plates, is much thinner than the regular plating of an Iron Man armor, and has a weaker armor composition to reduce the weight and size of the stored suit.

The Mark V is an emergency only suit, and thus is only equipped with the basics of Iron Man's arsenal, namely hand-mounted repulsors. Apart from its lack of heavy weapons and its light weight, it can still fly. However, it cannot reach high altitudes or speeds, and is limited in the weight it can carry during flight, but the advantage of flight means Tony can escape situations that he would potentially lose in without the flight capabilities.

The Mark V is made out of an unknown metal that is not the gold-titanium alloy of the other Iron Man platforms, and is composed of inter-weaving bands of small plates, instead of interlocking large plates, lowering defenses, but allowing it to be collapsed into a much smaller size, roughly the size of a briefcase, when not in use. Unlike the other Iron Man platforms which are powered by self-contained Arc Reactors inside the chest pieces, the Mark V relies on power from Tony's own chest unit, thus having a more limited amount of power and straining his chest unit, and keeping anyone else from using the suit.But sometime between Iron Man 2 and Iron Man 3, the Vibranium Arc Reactor was installed in the armor.

Essentially, the suit is only meant for usage in a civilian environment when away from the primary Iron Man platforms, and not geared for regular use on the more dangerous missions Iron Man may go on. Against terrorists or emergency non-armor attacks, the suit would serve adequately, but against Arc-powered opposition, the suit would be woefully outmatched. The suit's thin connected armor plates would serve to stop most forms of small-arms fire, smaller scale explosives, energy-based attacks, and high temperatures. However, more powerful weapons are shown to have extreme damaging effects against the suit. Ivan Vanko's energy whips were able to render the armor mostly destroyed in seconds through several hits. Though it is obsolete compared to the other Iron Man platforms, the suit shines in portability and its ability to be quickly deployed in any location from a small brief-case into a full suit of armor with 100% body coverage, offensive capabilities, and limited flight.

Despite the downsides, it was shown that it could still have impressive strength with large-scale damage, suggesting a high reliability. It is not shown if the flaps of the other Iron Man platforms are present on the Mark V, though it is unlikely from the looks of the back plates. This means that Tony cannot exceed certain speeds during flight for the chance of tumbling out of control or not being able to maneuver adequately.

The suitcase is armed by means of a key attached to a chain on the case's handle. Once armed, the bottom of the case is stepped on while on the ground, causing the case to spring open, flip up, and slide into several sections. The armored gauntlets with handles rotate into place for Tony to grab while stepping into the open armored boots. The handles protruding are grabbed and pushed into the gauntlets which wrap around his wrists.

The main section of the suit is lifted onto his chest where the ARC Reactor cover is attached to his chest and initializes the main deployment. The underlying leg mechanics and motors wrap around his legs while the plates covering his back go over his shoulders. The next stage of deployment is initiated when Tony pulls the gauntlets off of the main assembly and away from his body, extending fully out.

Chest plates slide across and flatten to provide torso, waist, and back protection while the ARC Reactor lights up to begin feeding full power to the suit. The shoulders and neck plates slide and lock into place as the helmet pieces are brought up from the back and fit around Tony's head.

The deployment is complete when the faceplate slides closed and seals, as the helmet and HUD receive power and finish initializing. The entire process is shown to have been completed in roughly 18-20 seconds, which while being incredibly quick, Tony is immobile and vulnerable during that time, and thus the suit can only be deployed when a safe moment is found and utilized.

The Mark V is only armed with a pair of standard hand-mounted repulsors. Their relative strength versus the other more advanced armors is unknown, but they manage to serve as reliable weapons in an unexpected attack. The suit has limited flight capabilities. It cannot reach the altitudes or speeds of the other platforms, and can only carry a limited amount of weight.

The Mark V was only displayed to have been deployed once, against Ivan Vanko's experimental ARC Reactor-powered energy whips. The fight was very short, but Ivan Vanko's whips managed to show they could be severely damaging to Iron Man's most basic armor, causing catastrophic damage to several sections, and disabled one if not both repulsors, which Vanko deflected with his whips.

Some of the armor had been destroyed by Ivan's whips as well, so some of Tony Stark's racing outfit was showing at the end of the confrontation. Only Tony Stark's use of martial arts enabled him to get in close and knock Vanko down before removing Vanko's ARC Reactor, rendering his whips powerless. The suit was later shown to be put up in the Hall of Armor in a pristine condition.

Tony built another Mark V for emergency use and scrapped the one from the fight with Vanko, then with the completion of the Mark VII and its improved deployment system, it was put on display in the Hall of Armors.

The Mark V was destroyed in the attack on Tony's mansion in Malibu, along with the other suits in the Hall of Armors.

The Mark V makes a cameo appearance in the interactive comic app, when Tony is seen creating it and when he uses it to battle Whiplash in the Grand Monaco Racing Track.

A maneuverable suit that can fold down small enough to fit in a briefcase. Perfect for the hero on the go.

The Mark V is an unlockable armor in the game. Find out that this armor can be unlocked at the Stark Malibu Mansion again. To do this, you need: Thor, & Iron Man (example) you need to be charge with Thor, once charged, fire an Electric Beam, & you can see that the right symbol has been changed.

Find out next, there's a evidence that you need to scan, & then there's a visible object (Must be Electric charger), & again you need to do the same method as Thor. Once done, the gate is unlocked. (You'll get a bonus Gold Brick) And that token should be inside.

To do this, there's a lever that displays a pixelated Iron Man face, when you see this, there are 4 buttons. For this method: 1st, Right, Black. 2nd, Mid-Left, Red. 3rd, Mid-Right Yellow. 4th, Left, White. Completing this method will unlock the Mark V token. 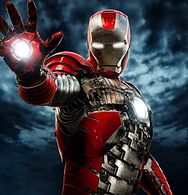 A Closeup Look At The Mark V 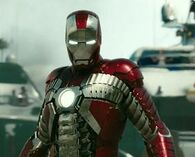 Mark V During The Battle

Back Of The Mark V 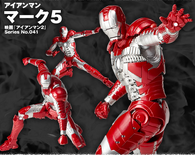 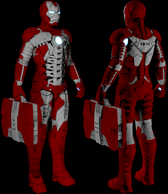 Even Another Full Armor

Retrieved from "https://ironman.fandom.com/wiki/Mark_V?oldid=76829"
Community content is available under CC-BY-SA unless otherwise noted.