Iron Man Wiki
Register
Don't have an account?
Sign In
Advertisement
in: Technology, The Avengers (film), Iron Man 3,
and 14 more

"...and there's one other person you've pissed off. His name was Phil."
―(The Avengers) Tony Stark to Loki in The Avengers.

The Mark VII (Mark 7), is a Fully Loaded Rapid Deployment Suit, and was the seventh suit created by Tony Stark, to surpass the Mark VI, sometime between the events of Iron Man 2 and The Avengers.

It was featured in The Avengers movie, and made its debut in the movie when Tony was forced to order J.A.R.V.I.S., to get it ready for combat, despite it still being constructed, to use it in the upcoming battle with the Chitauri Army, as the Mark VI was heavily damaged from its last use by Tony during the events in the S.H.I.E.L.D. Helicarrier.

The suit was built for heavy combat, and was heavily armed with weapons.

The armor has a unique feature that involves forming itself into a large pod, and when opened, had mechanical arms, that could extend and reach onto Tony's arms, grabbing them and quickly wrapping itself around him. This was done through the use of two special metallic bracelets, both of which had encrypted codes embedded within them in the black rectangular spaces. The laser scanners on the mechanical arms scan these to confirm the user's identity and activate the pod. The armor then forms itself around Tony.

The Mark VII's design differs from its predecessors. It has a new design and an improved body armor. The armor has red and gold plating with some silver plating just like its predecessor, the Mark VI.

The Mark VII is a bulkier suit with much more space for weapons. Its chest piece is circular like most other armors, unlike the triangular chest piece of the Mark VI.

The armor possessed air brake flaps, which reduced speed from 600 mph to 0 mph in seconds. It's the first Iron Man suit to ever have thrusters on its back which enabled Tony to freely use the repulsors on its hands in air combat.

This suit uses advanced technologies based on the Mark V suitcase armor, which makes it far easier to put on. When not in use, the Mark VII can be folded into a pod. When activated by J.A.R.V.I.S. it takes flight and flexibly opens itself to allow Tony to enter the suit and automatically wraps itself around him, anywhere at any time, without the aid of any external mechanics.

Like previous Iron Man armors, the Mark VII's primary weapons were the repulsors in its palms. The Mark VII's repulsors were upgraded to have a plasma charge in them.

This armor's chest unibeam is a powerful version of the repulsors in its palms.

The Mark VII had a triple barrel laser mounted on its left arm. Unlike the single-use lasers of the Mark VI, this weapon fed off of the suit's main power supply and could be used several times.

The armor had a missile launcher mounted on its left arm. One missile was powerful enough to blow apart a Chitauri Leviathan when fired between its armored plating, after the creature had been attacked by the Hulk.

Numerous guided micro projectiles were housed in the right shoulder pod. They were used to wipe out many Chitauri during the initial part of the invasion.

Side-winders were located inside the thighs, presumably for air-to-ground attacks when flying horizontally over a target. These missiles were fired after Iron Man flew inside a Chitauri Leviathan, destroying the creature from within.

The armor carries the same standard flares as its predecessor's. They are equipped in the same areas of the armor, such as the legs and hips

Before the Battle of New York, the Mark VII was created by Tony Stark to test a new deployment system.

This suit was located in Stark Tower, and was not yet complete around this time. With his Mark VI armor heavily damaged, Tony Stark decided to activate the Mark VII to fight off the Chitauri invasion. After a brief conversation between the two, Loki threw Tony off Stark Tower. After making its way to Tony, the Mark VII in pod form extended robotic arms equipped with laser scanners, which synced up with special bracelets worn on Tony's wrists.The armor then formed itself around Tony and saved him. He then started fighting off the Chitauri invaders.

Tony ultimately won the battle by flying the suit through the wormhole carrying a nuclear missile. The missile destroyed the Chitauri flagship and disabled the Chitauri on Earth. The suit ran out of power and fell to Earth, but was caught by the Hulk.

The Mark VII was used when Tony meets Rhodey at a restaurant, using the suit to travel there. Later, it was destroyed in the Hall of Armors along with the other armors, from Mark I - Mark VI.

The Mark VII is a playable and unlockable armor in the game.

The Mark VII is a free and playable armor in the game.

A distant view of the Mark VII statue.

The full front view of the Mark VII Statue.

The back view of the Mark VII statue.

The back side view of the Mark VII statue.

The left side view of the Mark VII statue.

The right side view of the Mark VII Statue. 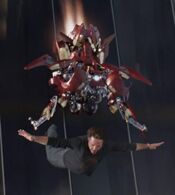 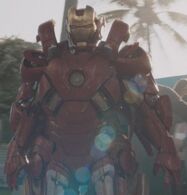 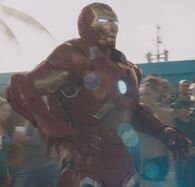 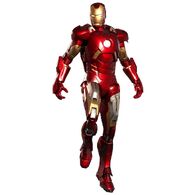 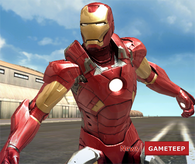 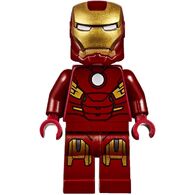