The Mark XI (Mark 11), was the second Advanced Iron Man Suit, and was the eleventh suit created and built by Tony Stark, after the completion and successful tests on the Mark X, which was also an advanced Iron Man suit, as well as the first one built, sometime after the events of The Avengers.

It was featured in the movie Iron Man 3, and made it's debut in the movie when Tony ordered J.A.R.V.I.S. to initiate the "House Party Protocol", in which it was activated along with all the other suits to aid Tony in his battle against Aldrich Killian.

The Mark XI is the third armor to feature a new design on the face plate, as well as in it's overall body armor. It retains the famous red and gold color scheme like most of its predecessors. The Mark XI reuses the Mark VII's chest plate, shoulders and biceps. It also has a new design for the thighs. This design would later be re-used in the mark XVII, Mark XXVIII, Mark XXXV and Mark XXXVI.

The Mark XI was built as a Base Model Redesign and a Prototype Stealth Armor. However, the suit's stealth capabilities are not as effective as its successor, the Mark 15.

This armor, just like most of Tony Stark's suits, greatly amplifies the user's strength during combat.

The Mark XI, along with all the other newly built Mark suits, uses a more advanced technology that was based off on the Mark VII's technology, which is able to wrap itself around Tony's body, without the aid of robotic arms or any external mechanics.

The armor features a new design in the helmet and face plate. This new helmet design is in many new armors such as the Mark XVII, XXIV, and XXVIII.

The Mark XI also has powerful thrusters equipped on it's back. The suit's footwork and leg supports are fitted with extra plates giving it tactical advantage and strength through flight.

Sometime after the Battle of New York, Tony, who was haunted by what happened in New York, got obsessed in making more Iron Man suits. One of them was the Mark XI, which feature a new design on the face plate, as well as in it's overall body armor.

When Tony's Malibu Mansion was raided, and later destroyed, the Mark XI along with the rest of the Iron Legion were still stored safely within the Hall of Armors Extension, as it was left undamaged during the attack. The chamber was still intact, completely sealed, and concealed from view.

When Tony summons the Iron Legion to aid in the battle against Aldrich Killian and his Extremis Soldiers, the Mark XI is one of the suits that shows up.

The Mark IX was activated by J.A.R.V.I.S. along with all the other armors in the basement of Tony Stark's Malibu Mansion, under the order of the House Party Protocol given out by Tony. It then flew out of the Hall of Armors and lead the way as it went towards the Roxxon Oil Rig together with all the other 34 armors.

When Tony orders J.A.R.V.I.S. to "Target Extremis heat signatures. Disable with extreme prejudice.", J.A.R.V.I.S. responds by saying "Yes sir!", which echoes out through all of the suits, including the Mark XI. The armor then starts targeting and attacking the Extremis Soldiers. It fights them off during the ongoing battle with help of the other armors. The armor was presumed to have fought and killed several extremis soldiers during the fight, as it was one of the last 21 armors left standing and succeeded in eliminating the remaining extremis forces with the help of the other Iron Legion armors. The Mark XI then resumes to flying around the oil rig in the aftermath of the battle.

The Mark XI was then detonated by J.A.R.V.I.S. for fireworks along with the other 20 armors, under the Tony's order of the "Clean Slate Protocol". This was to show Tony's devotion to his girlfriend, Pepper Potts. It was the 11th suit to detonate. 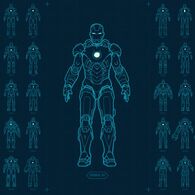