The Mark XII (Mark 12) was the third Advanced Iron Man Suit, and was the twelfth suit created and built by Tony Stark, after the successful completion of the Mark XI, sometime after the events of The Avengers.

It was featured in the movie Iron Man 3, and made it's debut in the movie when Tony ordered J.A.R.V.I.S. to initiate the "House Party Protocol", in which it was activated along with all the other suits to aid Tony in his battle against Aldrich Killian.

Unlike most of its predecessors, the Mark XII does not have the traditional red and gold color scheme. Its color scheme is mostly silver with gold platings. It also features a new design for the helmet and face plate. This new helmet and face plate will be used in other newly built suits such as the Mark XXII, Mark XXVII, and the War Machine Armor Mark ll or the Iron Patriot. This armor also has a new design for the legs and arms. These designs will be used in other newly built armors such as the Mark XXIII, Mark XXVII and Mark XL.

Like all previous Iron Man armors (except the Mark l), the Mark XII is capable of full flight.

Having a gold titanium, high density carbon and steel alloy exoskeleton, the Mark XII was built to be more durable than most of its predecessors. The only suit built before the Mark XII that is more durable is the Mark X. The Mark XII's durability was likely the reason it survived the battle with the Extremis soldiers.

The Mark XII, along with all the other newly built Mark suits, uses a more advanced technology that was based off on the Mark VII's technology, which is able to wrap itself around Tony's body, without the aid of robotic arms or any external mechanicals.

The armor has a composite gold titanium, high density carbon, and steel alloy exoskeleton. This feature can't be found in the previous armors.

The Mark XII also has powerful thrusters equipped on its back.

The Mark XII has standard based Repulsors.

Missiles: Numerous miniature air-to-air missiles are housed in the shoulder pods, which are a part of the detachable backpack. More missiles are located inside the legs, presumably for air-to-ground attack when flying horizontally over a target.

Flares: This armor contained numerous infrared flares, another feature common with its predecessors.

Lasers: This armor has the same lasers as the Mark 7.

Because of this, Stark began working on the Iron Legion, and through its development, created several Iron Man Armors, which were the Mark VIII, Mark IX, Mark X, and Mark XI, all with various designs and purposes. After the Mark XI's completion, Stark proceeded to working on his next armor, the Mark XII.

Stark created the Mark XII with a new design and various features, which would serve as the base design for several future Iron Man Armors.

With the Mark XII's completion, Stark proceeded to create the next Iron Man Base armor, the Mark XIII.

When Tony's Malibu Mansion was raided, and later destroyed, the Mark XII along with the rest of the Iron Legion were still stored safely within the Hall of Armors Extension, as it was left undamaged during the attack. The chamber was still intact, completely sealed, and concealed from view.

The Mark XII was activated by J.A.R.V.I.S. along with all the other armors in the basement of Tony Stark's Malibu Mansion, under the order of the House Party Protocol given out by Tony. It then flew out of the Hall of Armors and lead the way as it went towards the Roxxon Oil Rig together with all the other 34 armors.

When Tony orders J.A.R.V.I.S. to "Target Extremis heat signatures. Disable with extreme prejudice.", J.A.R.V.I.S. responds by saying "Yes sir!", which echoes out through all of the suits, including the Mark XII. The armor then started targeting and attacking the Extremis Soldiers in the Rig, and fought off some soldiers with the help of the other armors during the ongoing battle. The armor was presumed to have fought and killed several extremis soldiers during the fight, as it was one of the last 21 armors left standing and succeeded in eliminating the remaining extremis forces with the help of the other Iron Legion armors. The Mark XII then resumes to flying around the oil rig in the aftermath of the battle.

The Mark XII was then detonated by J.A.R.V.I.S. for fireworks along with the other 20 armors, under the Tony's order of the "Clean Slate Protocol". This was to show Tony's devotion to his girlfriend, Pepper Potts. It was the second suit to detonate. 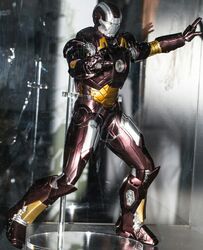 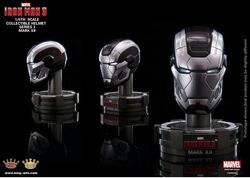 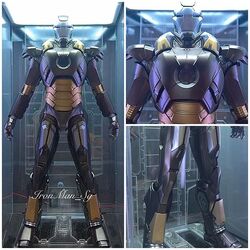 Retrieved from "https://ironman.fandom.com/wiki/Mark_XII?oldid=88419"
Community content is available under CC-BY-SA unless otherwise noted.