The Mark XIII (Mark 13), was the fourth Advanced Iron Man Suit, and was the thirteenth suit created and built by Tony Stark, after the successful completion of the Mark XII, sometime after the events of The Avengers.

It was featured in the movie Iron Man 3 and made its debut when Tony ordered J.A.R.V.I.S. to initiate the "House Party Protocol", in which it was activated along with all the other suits to aid Tony in his battle against Aldrich Killian.

This was also was the first suit to feature a rectangular design chest piece for its Arc Reactor.

The Mark XIII design is streamlined, built for aerodynamic flight potential. The modified rectangular arc reactor provides it with enough power to achieve flight and have maneuverability over other suits.

It resembles the original basic suits in overall design, only being black with silver plates and having a different reactor core. It is also notable for having lighter armor than previous incarnations of the design, utilizing aluminum and titanium steel over the original composites from the earlier designs.

Like all the previous Mark armors (except the Mark I), the Mark XIII is capable of flight. This suit can fly much faster and more aerodynamically than its predecessors.

The Mark XIII, along with all the other newly built Mark suits, uses a more advanced technology that was based off on the Mark VII's technology, which is able to wrap itself around Tony's body, without the aid of robotic arms or any external mechanicals.

It can flexibly open itself to allow Tony to enter into the suit and automatically wrap itself around him, anywhere at any time, much like the Mark XLII's technology and the other newly built Mark suits'.

The armor features a unique rectangular arc reactor, which can't be found in the previous armors.

The Mark XIII has standard based Repulsors.

The Mark XIII has a vertical rectangular shaped Unibeam powered by the new and improved Arc Reactor Mark II. It has a high power output, and is colored light blue with a glow coming from the Arc Reactor built into the armor's chest piece.

This armor is equipped with a minigun on each of its gauntlets, just like the Mark XVIII, Mark XXII, and War machine Armor Mark II/Iron Patriot

Sometime after the Battle of New York, Tony, who was haunted by what happened in New York, got obsessed with making more Iron Man suits. One of them was the Mark XIII.

When Tony's Malibu Mansion was raided, and later destroyed, the Mark XIII along with the rest of the Iron Legion was still stored safely within the Hall of Armors Extension, as it was left undamaged during the attack. The chamber was still intact, completely sealed, and concealed from view.

The Mark XIII was activated by J.A.R.V.I.S. along with all the other armors in the basement of Tony's Malibu Mansion, under the order of the House Party Protocol issued by Tony. It then flew out of the Hall of Armors and went towards the Roxxon Oil Rig, together with the other 34 armors. Tony then orders J.A.R.V.I.S. to "Target Extremis heat signatures. Disable with extreme prejudice.", J.A.R.V.I.S. responds by saying "Yes sir!", which echoes out through all of the suits, including the Mark XIII. The armor then starts targeting and attacking the Extremis Soldiers. It fights them off during the ongoing battle with help of the other armors. The armor was presumed to have fought and killed several Extremis Soldiers during the fight, as it was one of the last 21 armors left standing and succeeded in eliminating the remaining extremis forces with the help of the other Iron Legion armors. The Mark XIII then resumes to flying around the oil rig in the aftermath of the battle.

The Mark XIII was then detonated by J.A.R.V.I.S. for fireworks along with the other 20 armors, under Tony's order of the "Clean Slate Protocol". This was to show Tony's devotion to his girlfriend, Pepper Potts. It was the 12th suit to detonate. 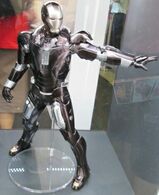