The Mark XIX (Mark 19), also known by its name as "Tiger", is a prototype High-Velocity Suit, and was one of the many newly built suits created by Tony Stark , sometime after the events of The Avengers.

The suit earned its name "Tiger" because of its ability to reach high-velocity speeds, and has a color scheme which resembles that of a tiger, which its name is derived from.

The suit was a prototype of the complete and advanced Mark XL suit. It was built with an emphasis to test initial high-velocity traveling. After the tests were completed and successful, a new and improved version was created with the full technology to go at very high-velocity speed travels, which was later known as Shotgun.

The Mark XIX is an extensive redesign of the Mark X. It has heavy flight stabilizers under its feet and on its torso. Designed for exploring maneuverability potential, the Mark XIX was unique in that it could maneuver through the air with little to no speed loss and could perform complex maneuvers at extreme speeds. It is equipped with visible and powerful extra repulsors, attached to the sides of the suit in the abdomen area, that were meant to increase flight speed and power.

The suit itself is strengthened to resist high G-forces during combat.

The Mark XIX is the improved version of the Mark X and has faster flight speed than its predecessor. Compared to the regular Iron Man armors, the Mark XIX can fly much faster and is estimated to be able to reach somewhere in between Mach 3 and Mach 4.

The Mark XIX has Thrusters equipped to its back.

The Mark XIX, along with all the other newly built Mark suits, uses a more advanced technology that was based off on the Mark VII's technology, which is able to wrap itself around Tony's body, without the aid of robotic arms or any external mechanicals.

The Mark XIX has a standard circular-shaped Unibeam.

This armor has missiles which are located inside the legs, presumably for air-to-ground attack when flying horizontally over a target.

This armor contained numerous infrared flares, another feature common with most of its predecessors.

When Tony's Malibu Mansion was raided, and later destroyed, the Mark XIX along with the rest of the Iron Legion were still stored safely within the Hall of Armors Chamber, as it was left undamaged during the attack. The chamber was still intact, completely sealed, and concealed from view.

The Mark XIX was activated by J.A.R.V.I.S. along with all the other armors in the basement of Tony Stark's Malibu Mansion, under the order of the "House Party Protocol" issued by Tony. It then flew out of the Hall of Armors and went towards the Roxxon Oil Rig together with the other 35 armors.

The armor can be briefly seen hovering in the background, waiting for Tony's commands as the Extremis Soldiers stand surprised with the arrival of the Iron Legion. Tony then orders J.A.R.V.I.S. to "Target all Extremis heat signatures, disable with extreme prejudice.", and J.A.R.V.I.S. replies to him with "Yes sir!" which echoes throughout all the armors, including the Mark XIX.

The armor then targets and attacks the Extremis Soldiers and fights them with the help of the other armors during the ongoing battle. From that point on, the armor might be seen as one of the suits attacking the soldiers. The armor was presumed to have fought and killed several extremis soldiers during the fight, as it was one of the last 21 armors left standing and succeeded in eliminating the remaining extremis forces with the help of the other Iron Legion armors. The Mark XIX then resumes to flying around the oil rig in the aftermath of the battle.

The Mark XIX was then detonated by J.A.R.V.I.S. for fireworks along with the other 20 armors, under the Tony's order of the "Clean Slate Protocol". This was to show Tony's devotion to his girlfriend, Pepper Potts. It was the 10th suit to detonate. 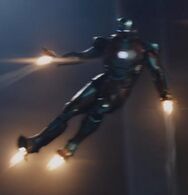 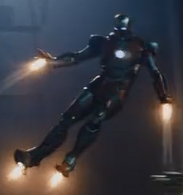 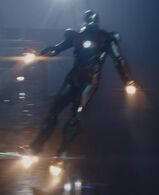 Retrieved from "https://ironman.fandom.com/wiki/Mark_XIX_-_Tiger?oldid=89699"
Community content is available under CC-BY-SA unless otherwise noted.